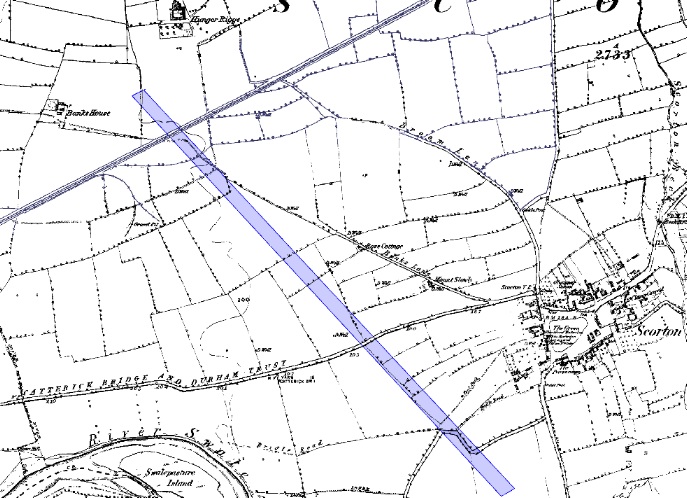 The cursus was originally about 2.1km long and aligned SE-NW. Clustered round the monument were a number of ring ditches, one that was excavated had a single burial with a beaker. This would date the site as being in use from around 3,500BC until at least the Bronze Age c.2,000 BC.

Cursus monuments are thought of as “ceremonial ways” – avenues, carved though the landscape that created a sacred or ritual space. Often these are associated with water, and Scorton is no exception – it sits close by the River Swale and also sits in a remnant alluvial flood plane. At the time when Scorton Cursus was built, it is likely that it sat amongst a large number of lakes. These monuments are often given their “ritual” function due to the fact that burial mounds tend to be placed in close proximity to them.

Almost the entire site was destroyed by quarrying, very little record of it exists yet it is one of the first and largest “communal ritual structures” in the north of england.

“The excavation of a section accross the complete width of the cursus, now reduced to a cropmark, produced evidence from recut ditches of at least two major phases of use. The first was indicated by narrow almost V-profiled ditches, which, having silted, were recut to a wide and shallow form. A low mound of indeterminate shape, possibly upcast from the ditches, was situated in the centre of the cursus, while a pit complete with a ramp was discovered as an external feature of the eastern ditch. A sampling strategy recovered a flaked stone assemblage of flint and chert, which included debris from knapping activities in addition to actual tools. In the area excavated no evidence was recovered for any recognisable form of occupation of any period.” Peter Topping 1978.

“A section cut accross the cursus by P. Topping of Newcastle University showed that both ditches had been re-cut from a norrower almost V-shape to a wide shallow form. A truncated post hole was found dug into the silting of the eastern ditch. A large low mound apparently lay within the ditches at the north west end of the cursus. There was also evidence here os external pits possibly holding upright timbers” YAJ 51, 1978

“The site was discovered by Prof J.K. St Joseph in 1949, and from his series of aerial photographs it was possible to trace the course of the cursus for approximately 2.1 kilometers. Evidence from soil stripping and exacavations has shown that the monument extends even further to the north-west, the north west terminal not as yet having been discovered. The south west terminal, which shows clearly on the aerial photographs, consists of a straight transverse ditch which joins the two main ditches at right angles. Clustering around it was a series of ring-ditch crop marks. The aerial photographs also show a series of bleach marks between the ditches at the southern end of the cursus, which may represent a series of contiguous mounds. This area of the cursus also features what appears to be smaller outer ditches, although they may be restricted to the southern end of the cursus as they were absent in the excavated area.
Another noteworthy feature brought out by aerial photography is the accuracy with which the ditches have been laid out, so they are remarkably straight considering the distance over which they extend”.

“from the evidence available at Rudston, it would appear that cursus monuments in Yorkshire developed during the late Neolithic, and flourished, as can be seen at Rudston in its magnificent complex of monuments, into the Early Bronze Age. It is within this local chronological framework that the cursus at Scorton must have developed, although not to as great an extent as the important centres of Rudston or Thornborough”. Excavation at the Cursus at Scoton North Yorkshire 1978 Peter Topping, Yorkshire Archaeological Journal, Volume 54, 1982