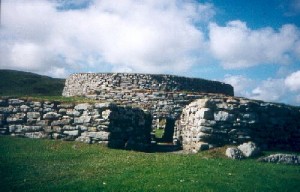 This site was occupied in several periods, originally late Bronze age between 700 – 500BC. Firstly a simple farmstead which expanded to a blockhouse (fort) and then by a huge circular broch. A population of around 60 lived in this little fortress. Later, 2nd century occupation is shown when a wheelhouse was added.