The purpose of using line of site analysis is to better understand the sites relationships with other locations, to identify possible trade and communications routes, and the location of other possible sites of interest, as well as providing an element of “evidence by association”. For example, a church on a possible alignment might be a good place to look for evidence of ancient remains not so far identified, and in finding such remains (of the same period) this reinforces the certainty of the alignment, indicating a communication link between these sites.

Genuine line of sight analysis is best done in conjunction with one or more site visits and thus falls a little outsite of the realm of the desktop search, however, a not insignificant contribution can be made simply by using an OS map.

To take line of sight bearings for a site, it is best to use the OS Landranger 1:50,000 map, the first task is to highlight the known interesting sites on that map sheet, I normally (since I have the luxury of two maps) mark out all ancient hill forts, settlements, river crossing points (especially those marked as old bridges), and other locations that are relevent. Where there are too many features of a particular sort (barrows for example) these are not highlighted since highlighting so many would cause the picture to become confused. It is important that this task is done several times over the course of an investigation, initially only known IA or Roman sites should be marked, other features can be marked but it is important not to have too many points to look at, this would get confusing in the early stages. It is likely that many other locations will have been settlement or meeting points, churches for example, that existed in Saxon times are very likely to have been shrines in Iron Age times, however, it should be remembered that every site has it’s own chronology which other sites may not share. As with most research, there is a limit the level of detail that can be obtained without site visits to confirm relationships suggested by desk top map work.

Having familiarised oneself with the site in relation to other sites possibly active at the time (after perhaps more research on any new sites identified other sites to establish what is known about them) a ruler can be used to see if modern tracks and boundaries line up to the line of site route suggested. If they do not, this does not mean the track did not exist, merely that this line of investigation is unlikely to yield possitive evidence. It should also be noted that alignments of sites should be expected, it is not unreasonable to assume that early settlements will have been further apart, and that those that came along later will have taken the proximity to the route into account and are more likely to have settled on a crossroads or near by, as population levels increased, people will have been forced to settle off the major routes, but this in itself may have created other routes. It is wise to bear in mind that you cannot see all that was there, so a line between two sites from the same period may have taken a detour to a third, currently unknown (at least to you) site. Similarly the natural landscape itself will have caused the track to deviate – in some cases quite massively.

One of the reasons for using a 1:50,000 scale map for this exercise is that at a higher definition, the straight line concept largely becomes obsolete without a detailed knowledge of the more local line of site markers, which are typically smaller and not noted on maps. Any alignments found and the line representing them should be treated as an indicator of the route in general. At this stage, it is not safe to actually draw in any but the most obvious ancient routes. For the later Iron Age, it is likely that many Roman roads actually follow, if not use the line of earlier routes, alignments of five or more ancient sites within a 20-30cm distance on this scale give a strong indication of an ancient route. 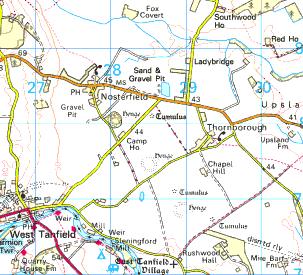 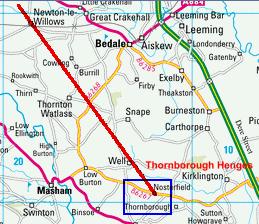 Above, Thornborough Henge alignment, although not straight in itself, this individual alignment, along with several other henges in the area show the route of a possible Bronze Age track, in the Iron Age this may still have been significant, the general area has wide spread evidence of Iron Age activity, and the Roman Villa at Well shows a strong indication of continued use.