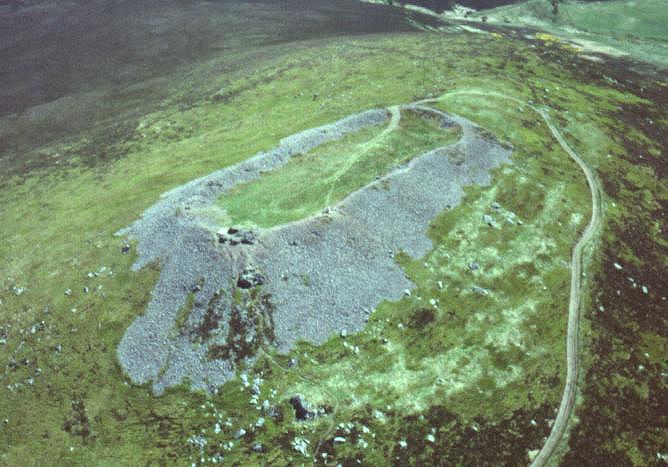 20 miles W of Inverurie. The approach to this, the second highest fort in Scotland, involves a somewhat arduous walk from Brae of Scurdargue, approximately 1 ½ miles NW of Rhynie on A941 to Dufftown.

The site crowns the conspicuous 562 m high SW summit of the Hill of Noth. The major feature is the substantial remnant of the vitrified wall, defining an oblong approximately 100 m by 30 m in size. An internal depression, in which water may sometimes be seen, probably served as a cistern for the initial inhabitants. Although it is difficult to imagine such a high site being occupied on a permanent basis, there are slight traces of platforms, perhaps for circular wooden houses, on the S side beyond the collapsed rubble from the vitrified enclosure. Much further out, on the N and E, there is a much less impressive defence, formed by boulders strung out along the flanks of the hill.

This is one of the best examples of a vitrified fort, it is near the village of Rhynie in northeastern Scotland. This massive fort from prehistory is on the summit of a mountain of the same name which, being 1,859 feet (560 metres) high, commands an impressive view of the Aberdeenshire countryside. At first glance it seems that the walls are made of a rubble of stones, but on closer look it is apparent that they are made not of dry stones but of melted rocks! What were once individual stones are now black and cindery masses, fused together by heat that must have been so intense that molten rivers of rock once ran down the walls.