An analysis of head carvings in a local area

In many churches throughout England there are carvings of possible pagan origin, others, whilst appearing to have been carved in a clearly Christian time, seem to recall pagan themes. This initial research report looks at one particular set of carvings at the Church of St Michael, Kirklington, and attempts to form groupings with similar carvings both locally and on a wider context.

It is important that these carvings are investigated and analysed. If it is true that they were inspired or were a continuation of religious imagery dating to the Roman period and before then it may be possible to understand the local god structure, the spread of some god figures may indicate the spread of a particular tribe and certainly a better understanding of them may help prove if they can be a valuable indicator of a sites prehistoric past.

At this stage only a few local and more widespread examples have been found to provide good comparative evidence. It is hoped to establish a recogniseable typology of carved heads, which may help authenticate some of the large number of portable head carvings that have been found. These carvings, not attached to a building have proven very difficult to attach to any period.

The Domesday book does not mention a church at Kirklington, but the sculpted heads which litter both the interior and exterior certainly testify to a more prehistoric time of worship. If these examples do not pre-date the Norman period in their date of construction, they are certainly inspired by more ancient god systems than purely the Christian period. Similarities to carvings in churches with better defined ancient lineage and pagan origins, as well as the sites location, which is close to major Bronze, Iron and Roman period sites such as The Thornborough Henges and Dere Street give these carvings credence as a continuation of ancient god forms as focal points for worship. 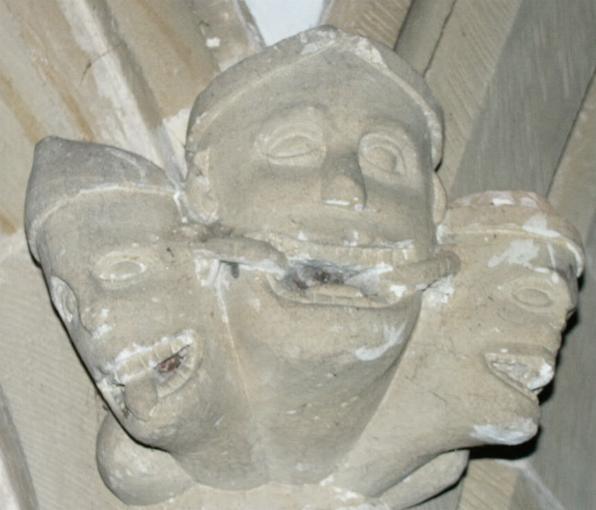 The first Kirklington Head to have a possible identification as a Celtic God is this triple headed sculpture with links between the centre heads mouth to the outers head’s ears. This imagry was apparently widespread thorughout the Celtic world, it shows a god of elloquence, whose joyous followers have a direct bond between his words and their ears. See the link below.

It appears that the Celts integrated the God Heracles as an aspect of their own God Ogmios.after their assimilation into the Roman Empire, the ear-tongue imagry, however, is of earlier Celtic origin. 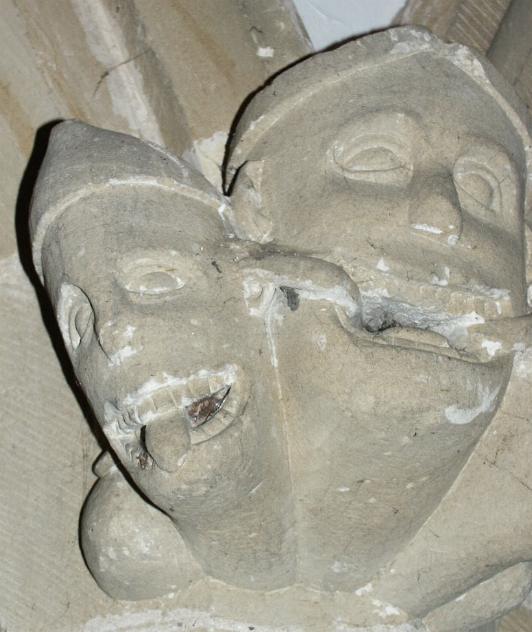 “the Greek writer Lucian, who was born at Samosata on the Euphrates in the second century A.D., relates that as he was travelling through Gaul he came upon an old man, clad in a lion’s skin, leading a group of followers whose ears were attached to his own tongue by little gold and amber chains of great beauty and delicacy. The men were not forced along, but followed him eagerly and heaped praises on him, and it was clear thet they would regret their liberty. A Greek speaking Gaul who was standing near explained to him the the old man represtented Heracles, clad in his lion’s skin, because, said the Gaul, the Celts believed that eloquence was of greater power than physical strength, and also that eloquence reached its climax in old age.” Nora Chadwick, The Celts. 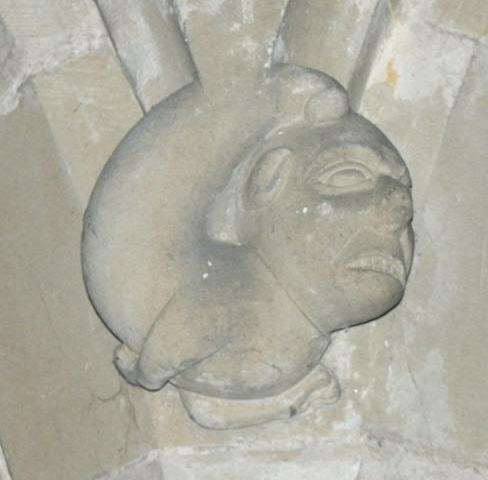 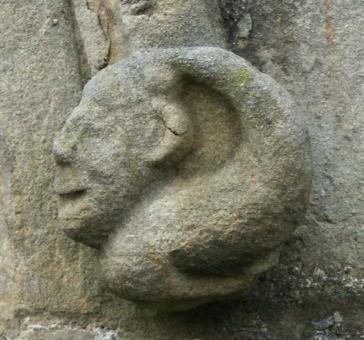 The fish head carvings, the top carving is from Kirklington, the right from Well, a few miles to the north. 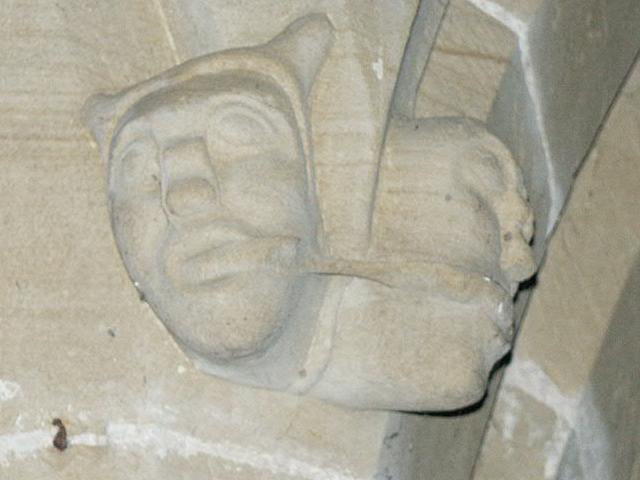 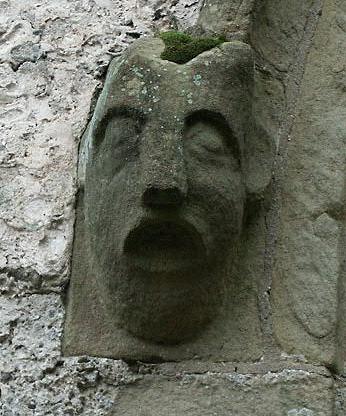 Horned heads from the interior (top) and exterior of Kirklington 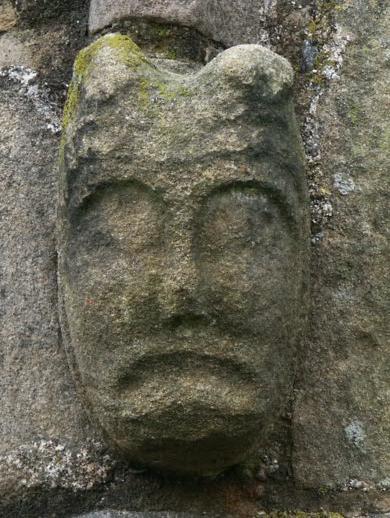 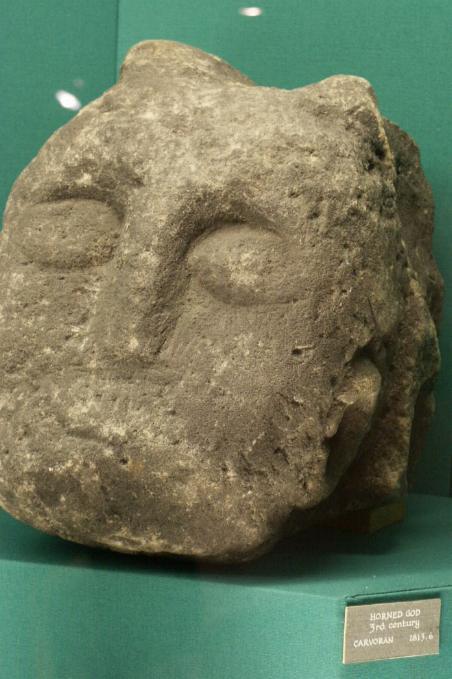 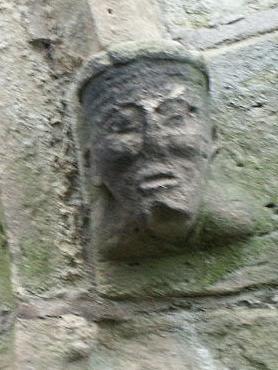 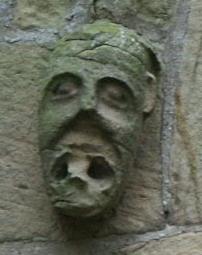 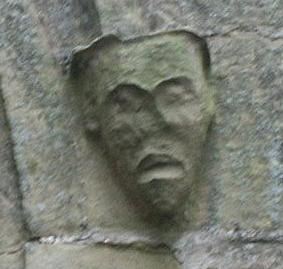 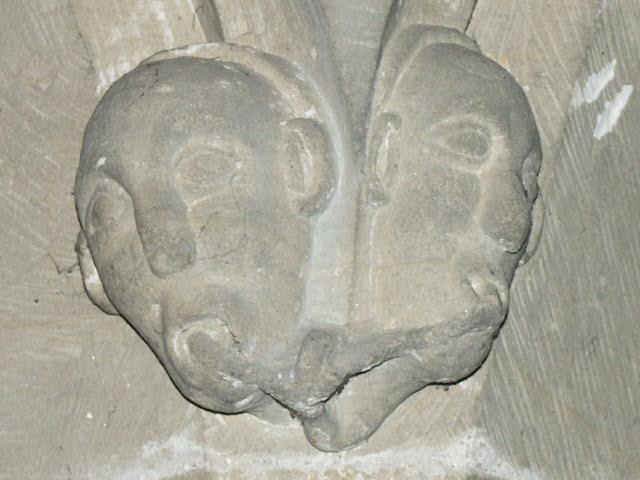 Some carvings, like these from Kirklington, involve odd protrusions from the mouth. 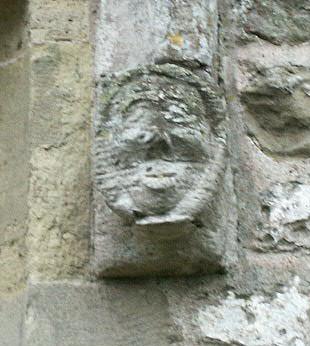 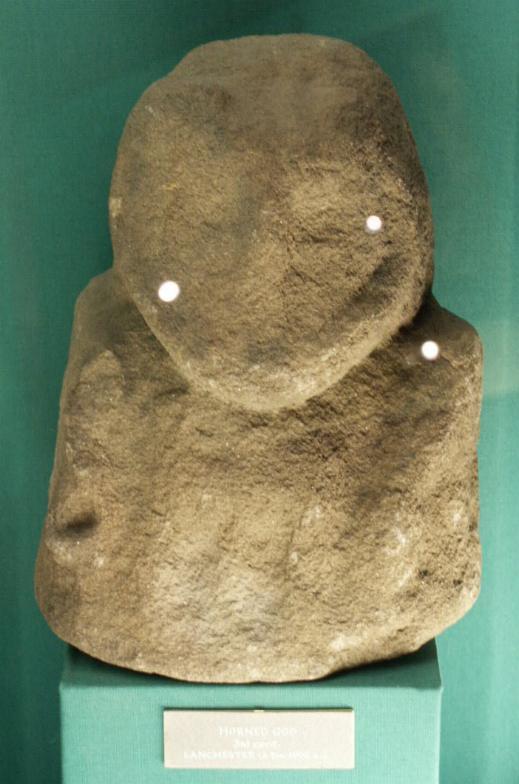 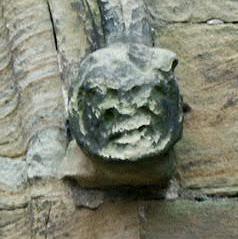 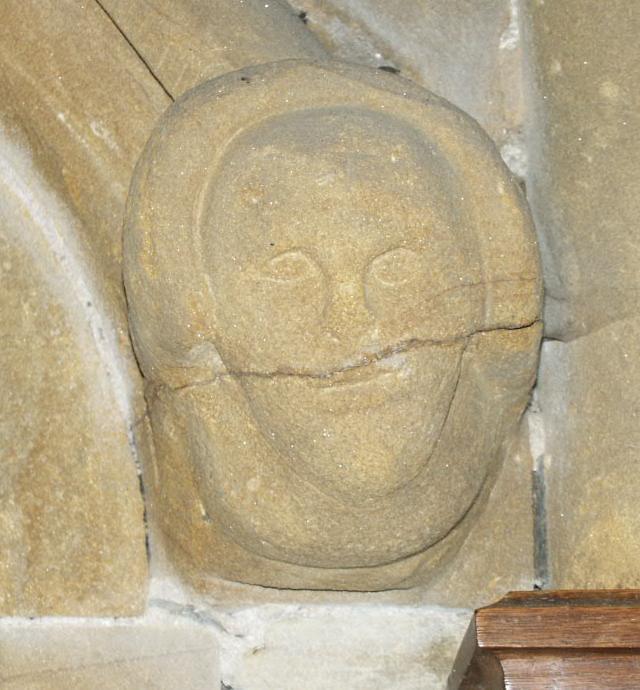 Other heads at Kirklington 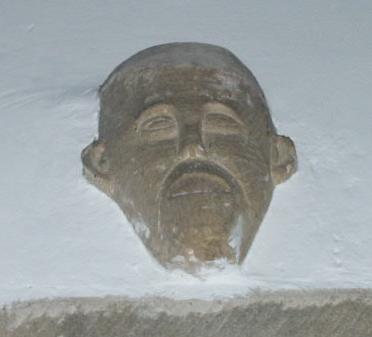 This mousetached head from Kirklington is similar to the 2nd C BC. bronze head found at Witham below (B.Museum). 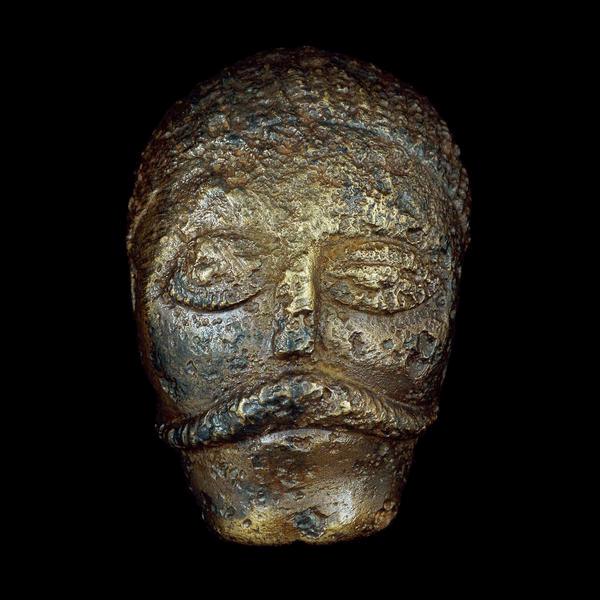 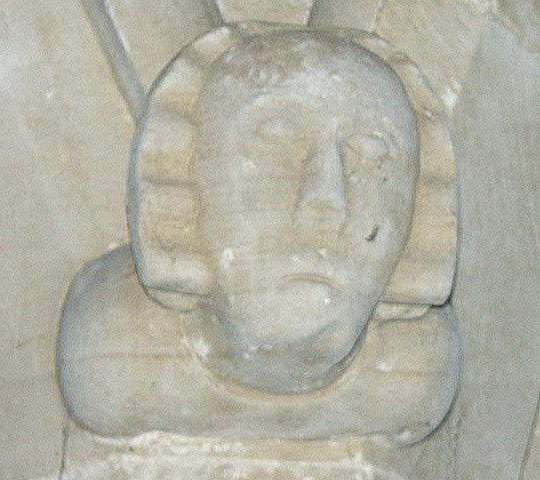 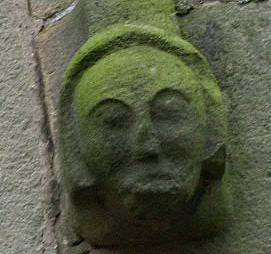 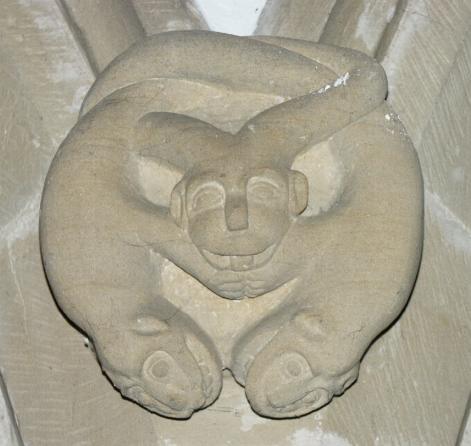 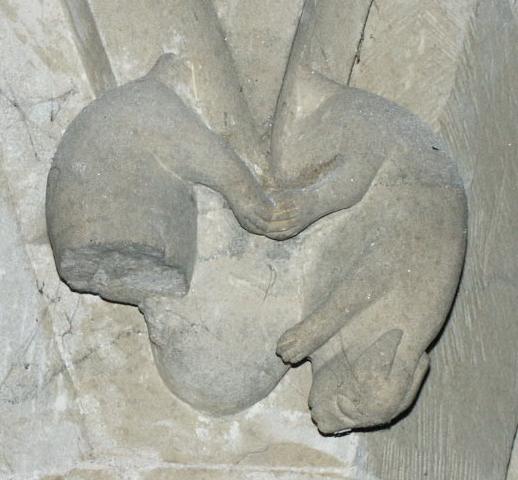 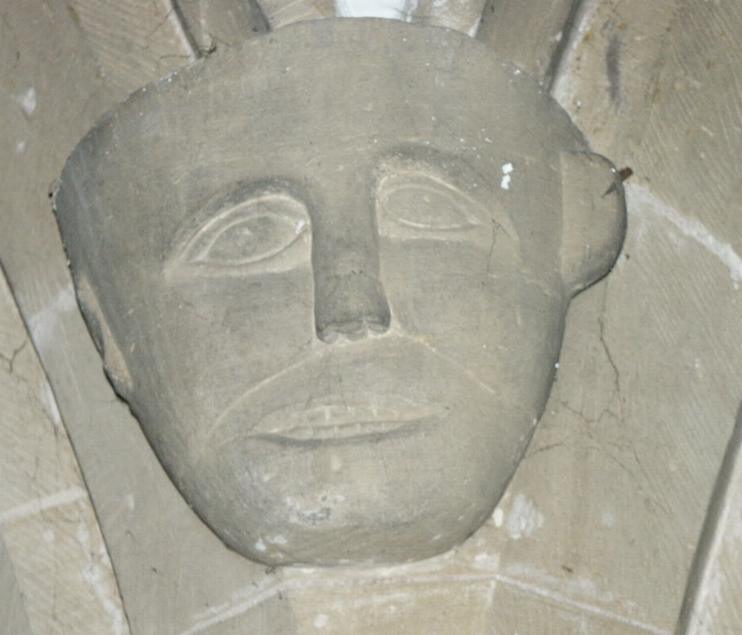 “In Britain (Richborough), we find the divine name Ogmia – that this
refers to a male figure is confirmed by the image of the god
accompanying the inscription. Perhaps Ogma(e) is the Irish reflex of
*Brittonic Ogmia, with the usually feminine -ia stem instead of
expected masculine -ios. At the time of the earliest Ogam (or Ogum)
inscriptions, learned Irishmen may have connected Ogma with this new
alphabet (the connection between Ogma and forms of magical writing or
tally-marking may have been somewhat ancient anyway). By the same
process whereby a root like Domun has a feminine i-stem suffixed form
Domnae, Ogum could receive an i-stem suffixed form Ogmae – whether or
not Ogum and Ogmios (or Ogmia) are connected linguistically, someone
at some time connected the names, helping to preserve a more archaic
form for Ogma.” Chris Gwinn