Finavon Hill has attracted a great deal of archaeological interest from antiquarians and archaeologists over the years especially since it displayed traces of vitrified rock. It was planned 100 years ago by David Christison and was subject to extensive excavations undertaken by Prof. Gordon Childe between 1933-5. That the fort had been burnt was clearly attested not only by the vitrified material but also by the charred timbers located during the excavation. The fort could also be readily compared to other oblong forts and was, therefore, targeted for scientific dating techniques including radiocarbon dating, thermoluminesence and archaeomagnetic dating.

A survey plan of the fort was undertaken using a variety of techniques. The fort is c. 155m long by c.55m wide. There is a T-shaped outwork at the eastern end. As described by Childe the southern side of the fort sits back at least 20m from the cliff edge. In addition at the western end it extends to incorporate a natural depression. In both cases the apparent disregard for the natural topography as a line for the ramparts surely indicates that the practical need for a defensive position was not the a primary reason behind the construction of the fort. Indeed the need to obtain an oblong shape, despite the topographic variations, suggests that this may have been as much an issue in the minds of the builders. It is also possible that the inclusion of the natural hollow at the western end may

have been of some significance, perhaps related in use to the well at the eastern end.

The fort and its immediate surroundings have been subject to a great deal of quarrying which has had a profound effect on the nature of the remains and can be very confusing when visiting the site. Three main areas of quarrying can be identified on the hill: the entire southern side of the southern rampart; a small section into the exterior off the northern rampart; and an extensive set along the north-eastern face of the hill outside the fort.

Although in general the state of preservation of the features can be described as stable there are a number of small areas of active erosion. The areas effected by the quarrying and the excavations are the most unstable and most prone to erosion. Particularly noticeable is the loose stone work in what was Childe’s trench D or the eastern end of the main quarry in along the southern rampart. Animal activity on the site appears to be relatively restricted although there are a large number of mole hills on the southern terrace.

Excavations carried out in 1933-4 by Childe (1935) showed that the wall was about 20′ thick and that it stood 12′ internally and 16′ externally beneath the grass-grown rubble. There was a row of dwellings with hearths under the shelter of the N wall. Pot-making, spinning and metal-working were carried out in the lee of the S wall. The finds, including gritty plain potsherds, stone whorls, flints, an iron ring, and a thick jet ring, are in the NMAS (Acc. Nos: AO 104, BE 480, HH 386-416).
In 1966 MacKie dug two trenches against the inner faces of the N and S ramparts, and three radio-carbon dates were obtained – c. 390, c. 480, and c. 665 BC – indicating that the fort was in use from the 7th century BC until at least the late 5th or early 4th century before being destroyed. 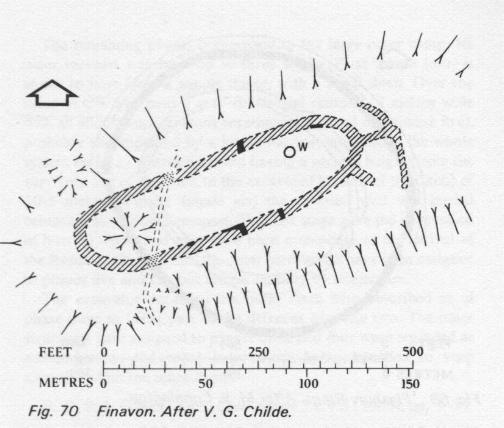 “This is a typical vitrified fort, so far as such a thing can be said to exist, and is unusually accessible. It was investigated by excavation in the early 1930s, so more details are known of its construction than of most others.

It was defended by a single massive wall, now heavily vitrified, enclosing 0-4 hectare. The plan seems to be the result of deliberate setting out, parallel-sided with semicircular ends, and pays little regard to the form of the ground. There is a further arc of walling outside the east end, linked to the main enclosure by a straight axial line of wall (cf. Castle Law, Forgandenny); this is now slightly lower than the ramparts which it links. There is also a horn of vitrified material projecting at the east end of the south wall. These features were not investigated. There is a rock-cut well in the enclosure, and a deep hollow which may also have been a
water hole at the west end. The ramparts have been broken through by a modern track, but no ancient entrance can be identified.

Excavation showed that the wall was 6 metres thick, and it was estimated originally to have stood 3-6 metres high internally and 4-9 metres high externally, having been built on a slope. On the inner face, at a height of 2-4 metres, the wall face was set back about 0-7 metres, and wherever tested remains of burned timbers were found against the inside of the rampart. It seems that the whole circuit must have been lined with timber buildings. Some very coarse pottery was found. More recently, radiocarbon dating of these burned remains indicated a date of probably between 400 and 600 BC for their construction.” – A.H.A. Hogg – Hill=Forts of Britain.