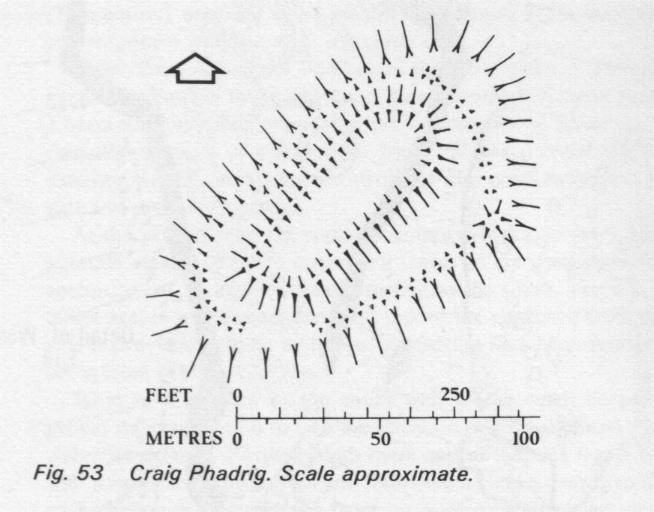 Craig Phadraig is a hilltop fort within a Forestry Commission plantation, 2.5km west of Inverness. It occupies a position with excelent views over the Beauly Firth. The rectangular area enclosed within the ramparts measures 75m x 23m. Radiocarbon dating indicates that the fort was built in 5th or 4th century BC.
The site comprises two steep ramparts, which are mainly grass grown. These were constructed of timberlaced stonework and then burnt, producing extensive vitrification. A vitrified part of the wall can be seen near a pine tree at the northern end.

The ramparts are grass covered, the inner stand 4m high externally and 1m internally, the ruined rasmparts spread some 10m in width. No entrances to the inner rampart have been found. The interior of the fort has an area of 0.2 hectares..

The outer rampart is much slighter, a mound in the eastern corner may be natural.

Excavation in 1971 has produced evidence of re-occupation in the time of the Picts, 6th century AD. 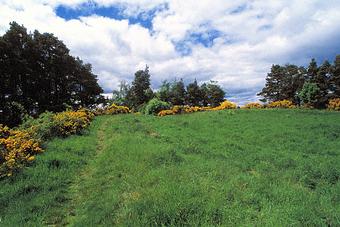 “The construction of the circling rampart at Craig Phadrig has been examined in detail and the basic principles there established probably apply to all forts within the Inverness area. The total thickness of the wall at Craig Phadrig was just under 21 feet (6 m.) and on the basis of the quantity of the collapsed debris still remaining, must have originally stood at least 26 feet (8 m.) high. The rampart consists of two revetments enclosing a rubble core. All stone was obtained locally if available, by surface collection, although for some forts (including Craig Phadrig?) quarrying must have been essential, particularly for suitable blocks for the revetment

The rampart was founded on the natural turf, no previous preparation having been undertaken except the marking out of the line of the wall. In some cases it is suggested that the rampart was founded on a raft of logs, but no examples of this type appear in this area. The revetting walls were carefully constructed, each occupying about one-third of the total width of the wall at the base, and gradually thinning as the structure reached its full height. The lowest yard (m.) is invariably constructed of very large blocks to provide an adequate foundation, while above this smaller blocks were used, and frequently timber lacing was introduced into the design. Clear evidence of horizontal timber beams running from the inner revetment into the core was found at Craig Phadrig, and circumstantial evidence supports a network of horizontal, transverse and vertical limbers tying the inner revetment thoroughly to the core. Although timber beams appear in the outer face of some continental forts, they never did so at Craig Phadrig. Besides its value in tying revetment to core, limber lacing has the advantage of preventing a large section of the core “running” should the outer revetment be breached by attackers. If that happened, a natural causeway would be provided for the invaders. Furthermore, timber lacing has the properly of spreading the weight-load in a massive structure. Brochs built entirely of dry stone, without any timber lacing, frequently show intensive shattering and cracking of stones in the lower courses due to the pressure from above.

Small finds and continental parallels were the original dating criteria for fixing these forts firmly within the Celtic Iron Age, and the use of radio-carbon dates on the Scottish forts in the last decade has confirmed the date for Craig Phadrig, to be 350 B.C.; Craig-marloch Wood. The evidence from several sites, including Craig Phadrig. Suggests that the primary fort survived for a relatively short time, and was refurbished later.

“A preliminary examination of the bones from Craig Phadrig shows a high proportion of red deer, and also possibly reindeer. The European wild boar is also recorded. Of the pastoral animals, cattle were by far the most important.” The Hill Forts of the Inverness Area, ALAN SMALL