Castle dykes it is a small class one henge, only 90m across, perched on the high ground up in the North Yorkshire dales.
Take the Leyburn road, past Castle Bolton, past the increasingly grey stoned villages and towns, follow the screaming motorcycles and the wobbling cyclists. Keep going: further up, further into North Yorkshire until you come to Aysgarth: home to the famous waterfalls, with its rash of tourists, walkers and sightseers. Then turn off the increasingly narrow road, signposted Thornton Rust. 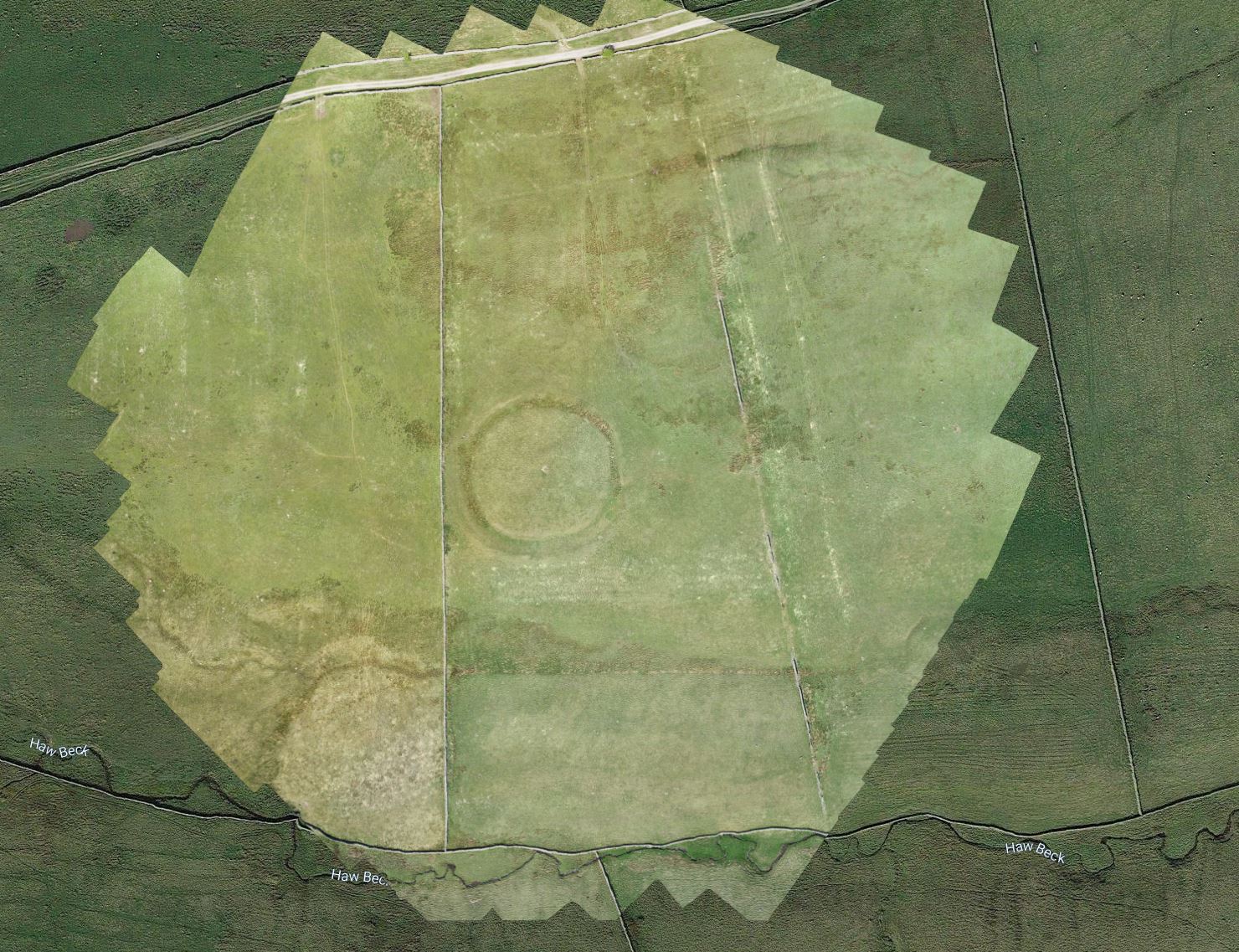 At this point a certain disappointment crept over the team, as the tarmacked road was immediately replaced by what can only be called a track, and a rough one at that. Rather upsettingly it was quickly clear that walking, drone kit or not, was the only option.
The sun beat down, the bags dragged, and the stones underfoot refused to cooperate, but duty called, so the
Bright Orange Mini Mapping Machine was dutifully abandoned, and the team began to walk.
Actually, this was, after the shock had worn off, a not unpleasant experience. All around us was the stunning beauty of the North Yorkshire Dales: the only sounds the plaintive sheep, curlews screaming, and the buffeting of the brisk wind.
The countryside was green and bright, but the bones of the ground showed through the rough thin soil: grey walls hemmed us in, the stones covered with blood red lichen, the iron gates rusty and raw pink with corrosion. A series of natural springs ran across the path, the waters running secretly into the verges: they have washed the soils from the path, leaving them stony, sharp and bleak.
The track ran fairly flat, hemmed in by rough stone walls until, after 2 miles, it suddenly rose, climbing steeply, forcing us to push harder until suddenly we were there. 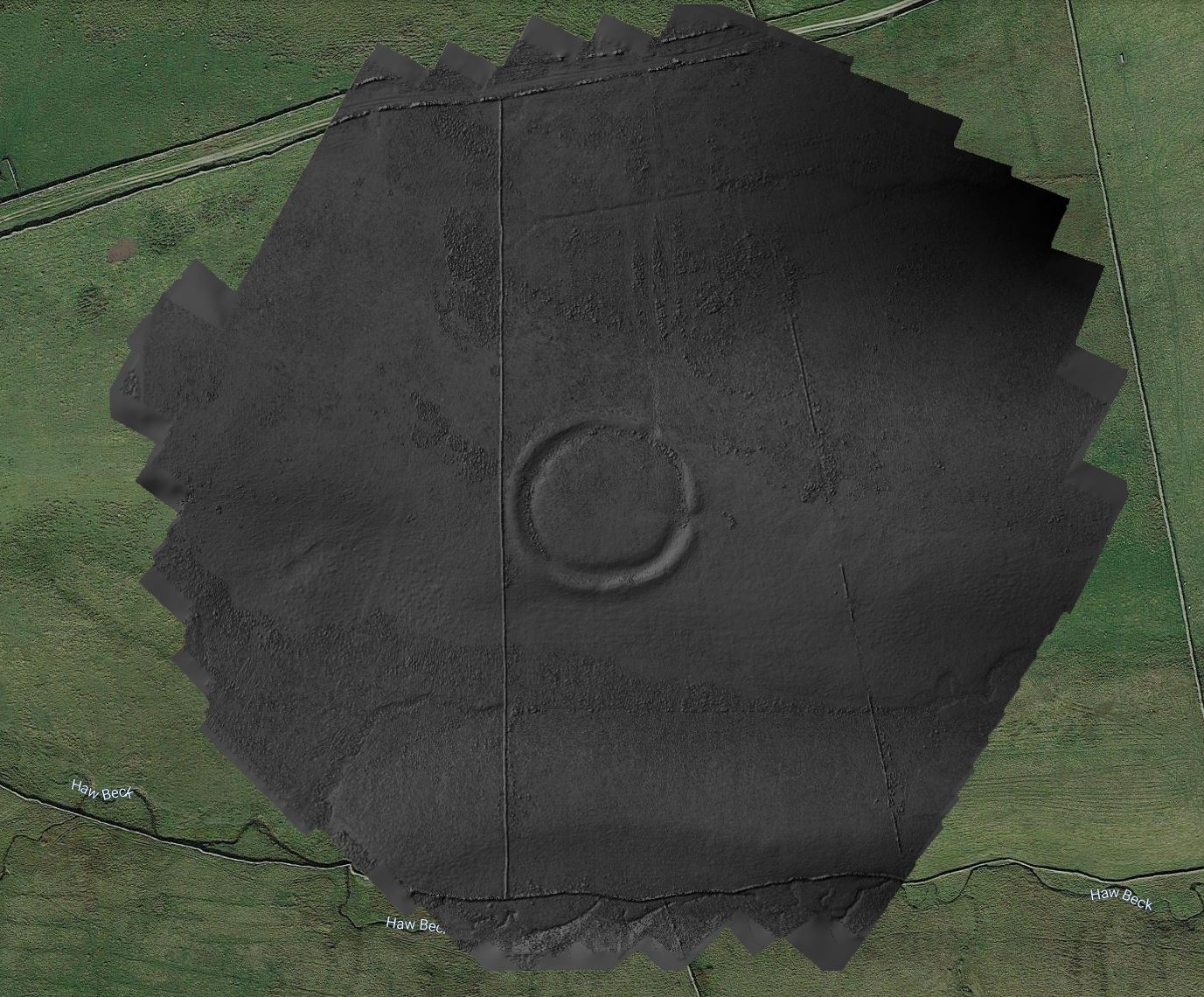 The land around the henge is a flat platform. The earthwork itself is 200 yards from the path, along a damp field boundary, that rises at the last second to a flat area, tilted to the south east – towards the rising sun on the winter’s equinox.
The henge is a typical shape: circular, 100m across, consisting of bank, ditch, flat central platform, then ditch/bank again.
The ditches remain about a metre deep: the banks similar. We sat and quietly gazed, absorbed by the bleakness and the loneliness of the setting. 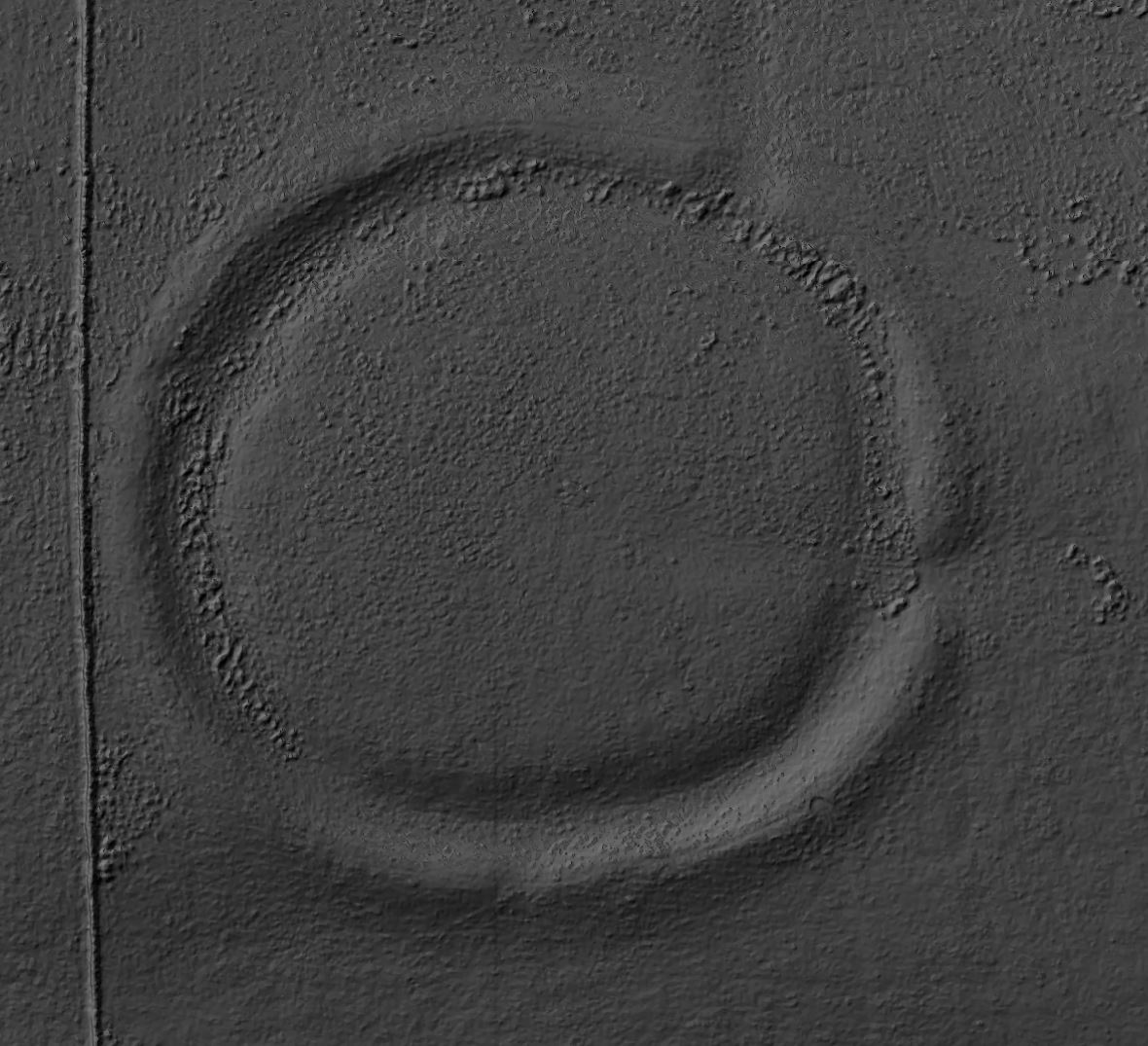 There is one entrance into the central area: again facing South east, facing the great peak off in the distance, the most prominent and magnificent mountain in sight. And to one side of the bridge across the ditch and bank is a large stone, now 90% buried in the bank to the right of the entrance. Was there once a twin guarding the other side? Who knows? Certainly it would be easy to believe that this 4000 year old monument had twin grim stones stood each side of the entrance way to welcome the midwinter sun and frame it for the frozen watchers.
Why did our ancestors build this great earth temple out here? There is no clue. No apparent reason. But all we can say is that the amount of work for a primitive society with no metals and no machinery is simply monumental, and therefore they did not build it on a whim, and neither did they build it quickly. This is the work of an organised society committed to achieving a group objective.
Whatever the reason it was clearly good enough for them. And therefore good enough for us. We took our picture,s and quietly left the henge to the screaming birds, the sheep, and the lonely sky.
Civilisation, our garden and wine is less than an hour away and yet, for an hour or so sitting on these earthen banks, it seemed a million miles and 4000 years away.
Text and images supplied with thanks by YAAMAPPING