We headed North then West: up to Scotch Corner, along to Kirby Steven and through the Eden Valley, past Kendal, on to Windermere, Ambleside and then turning onto the terrifying Wrynose Pass. 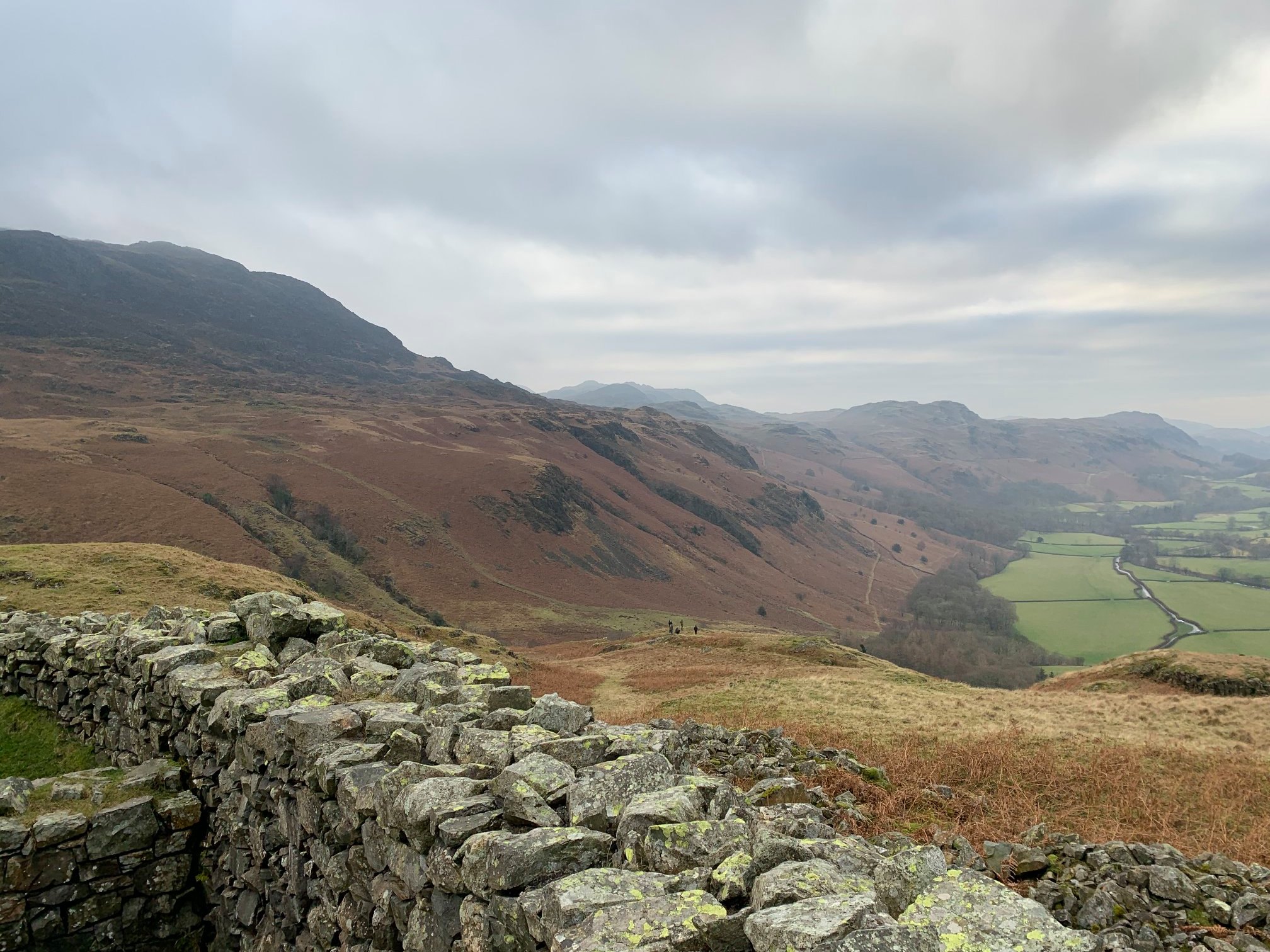 Narrow, crumbling and steep, random tight turns and nearly sheer sided drops on either side, we crawled along the track of a road, climbing higher and higher as water ran across the tarmac and mist settled on the high peaks like smoke. 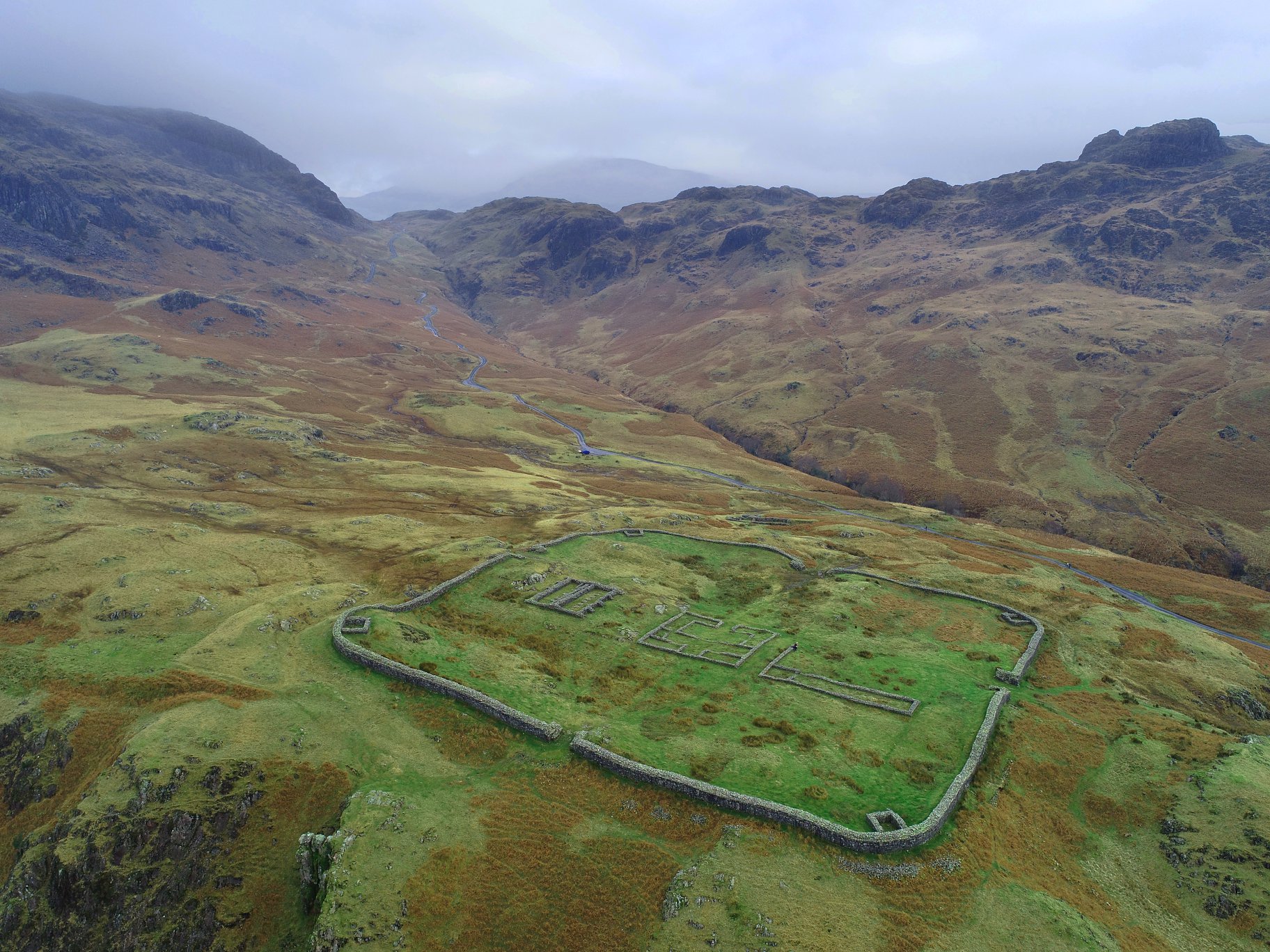 Eventually, and introduced by dire warnings on battered road signs, we reached Hardknott Pass.
The road, incredibly, gets narrower, steeper and more frightening as you crawl along - desperate to keep enough momentum up to tackle the ever tightening, ever narrowing bends without going fast enough to fly off the track and into the rocky grassy verges. 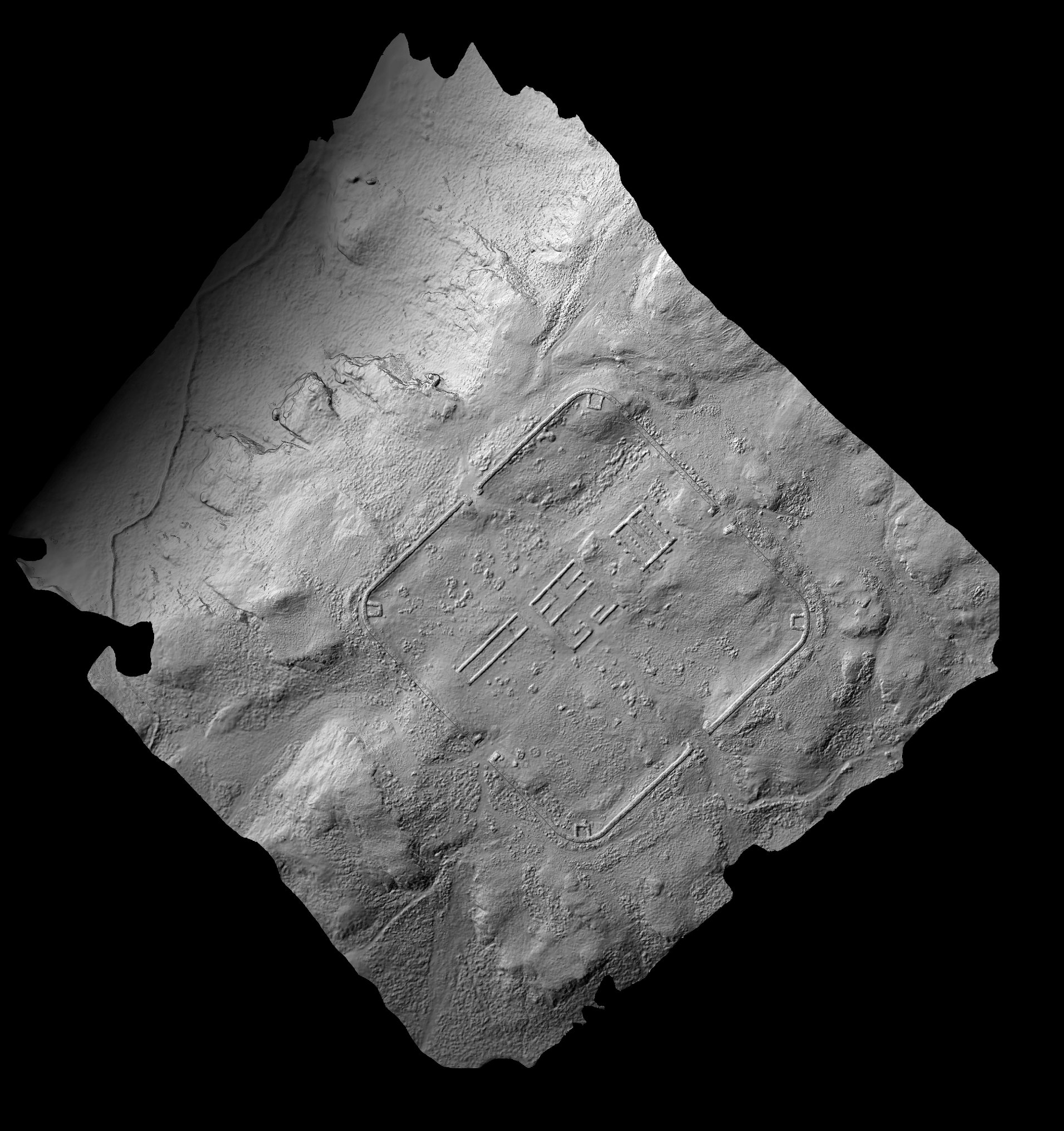 The drive grinds on for what seems like hours, each turn and challenge more difficult than the next.
Eventually we saw our objective. Hardknott Roman Fort, laying strewn like a discarded child’s toy on the high mountain side, impossibly canted to the east and perched precariously on a rugged cliff edge.
Known to its builders as Mediobogdum, the fortress is square, as opposed to the usual rectangular shape. It is 115m to a side, and we have the traditional four gates. These are even today over head height. 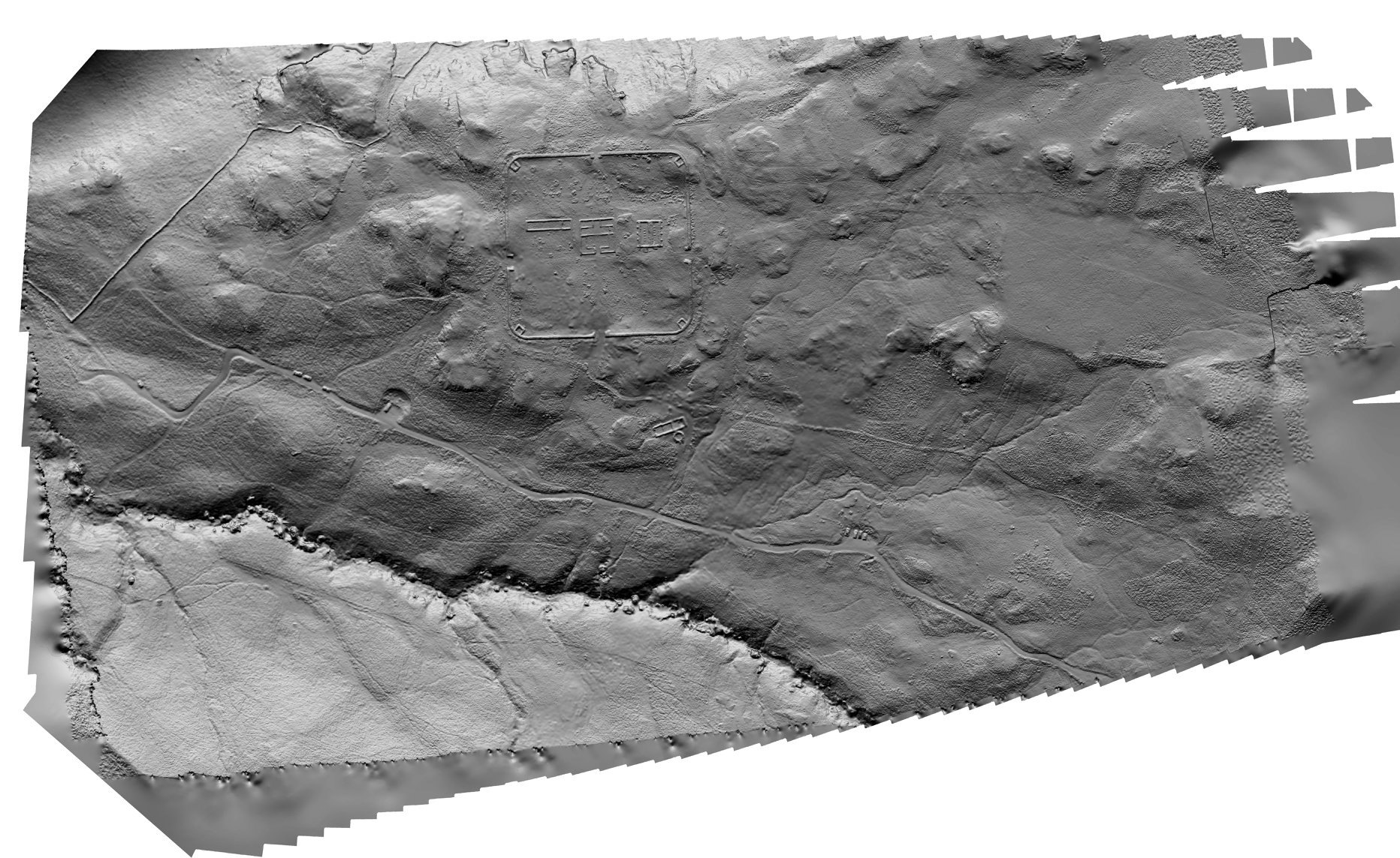 The Southern gate being the main entrance, the east and west are double carriageway sized.
The Northern gate is narrower, probably because it was less used, opening as it does onto a drop that would be calamitous to try to descend. You wouldn’t want to be a sleepwalker posted here. 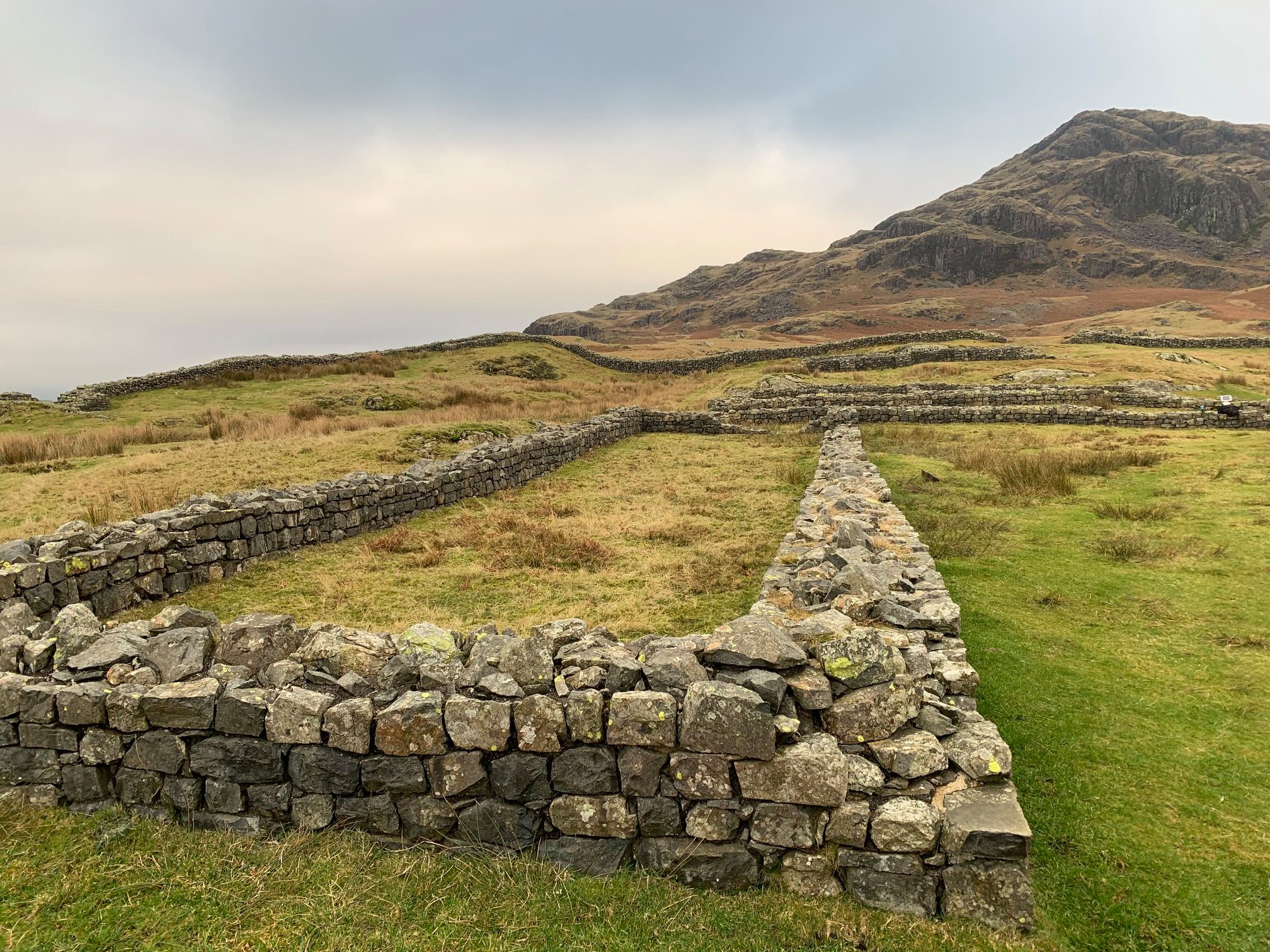 The fort was built in the early second century and abandoned 30 years later when the Romans began the Antonine advance into Scotland. Reoccupied around 200 AD the occupation seems have been continuous until around 375 AD, only 40 or so years before the Romans left Britannia for good. 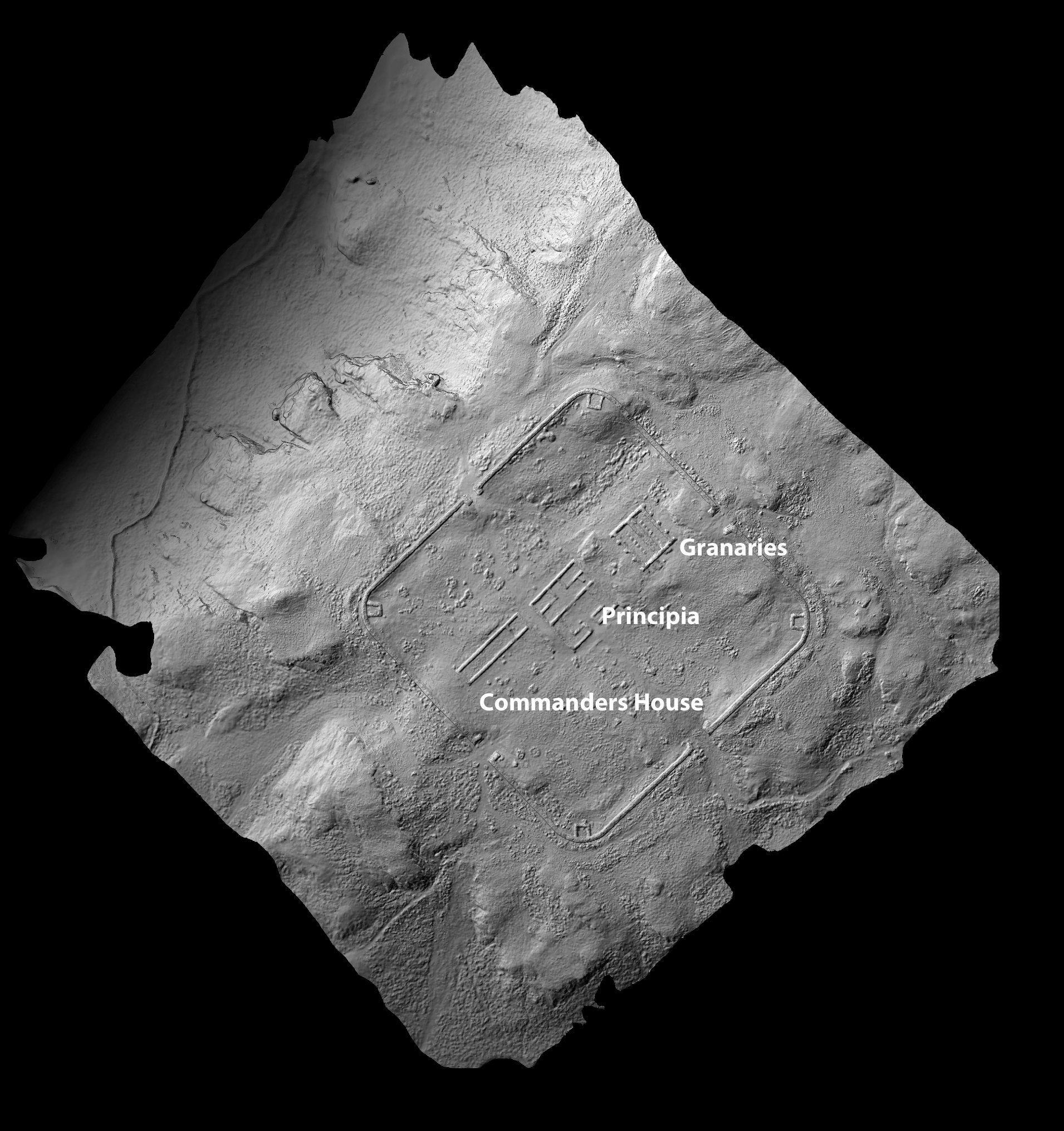 The military purpose of the fort is emphasised by the four strong corner towers, and the permanent occupation buildings which include Granaries, a Praetorium (the commanders house) and the Principia, or Headquarters building. All these are visible today as 30cm high stone walls. 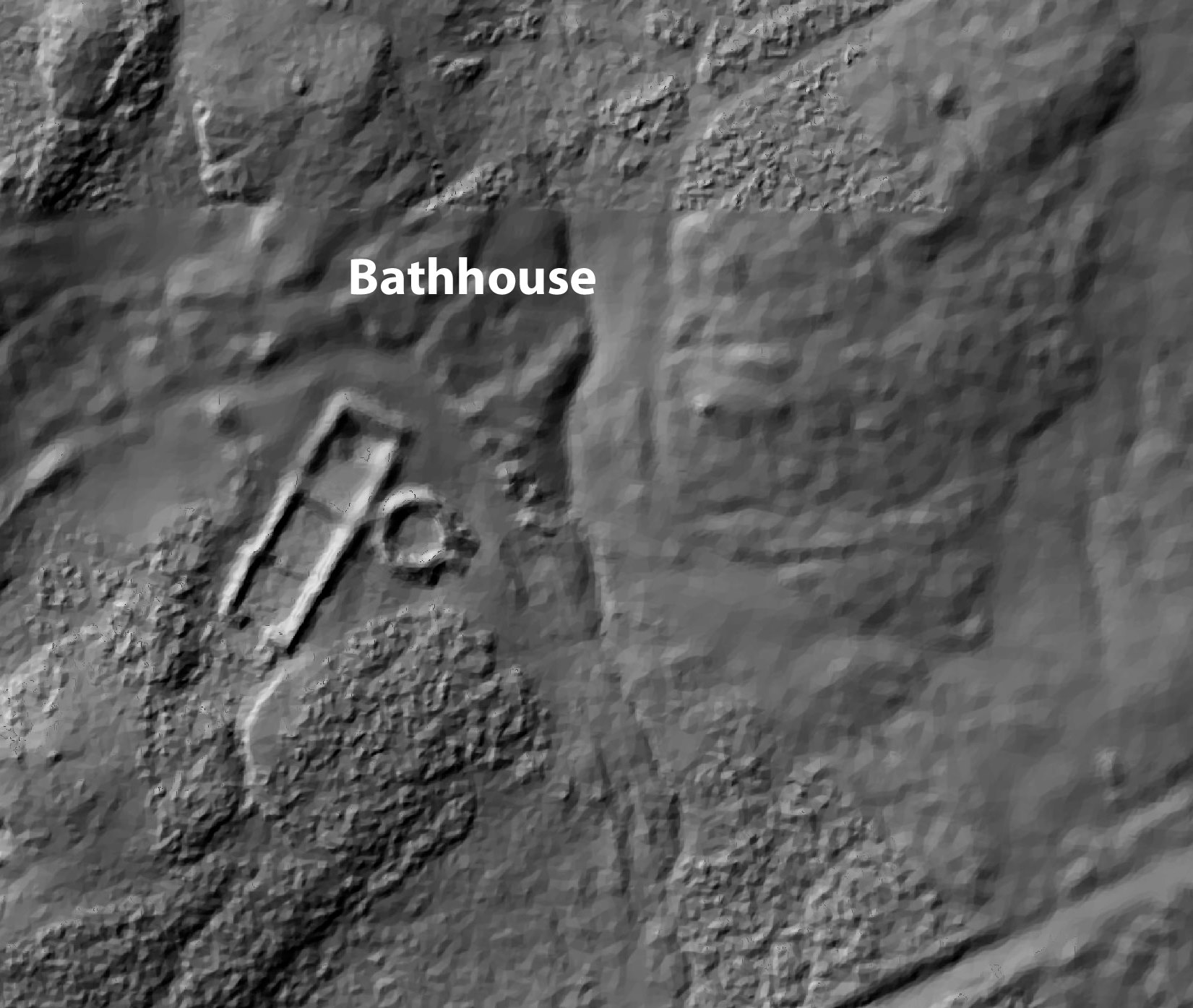 Outside the walls is a fine bathhouse, again marked by low walls.
Off to the east is a well-preserved parade ground, slightly larger than the fort itself, with a clear track running from the east gate to the parade ground. To the west what appears to be a lookout post: a hillock with an artificially flattened top and mind-numbing views over the Western and Northern approaches. 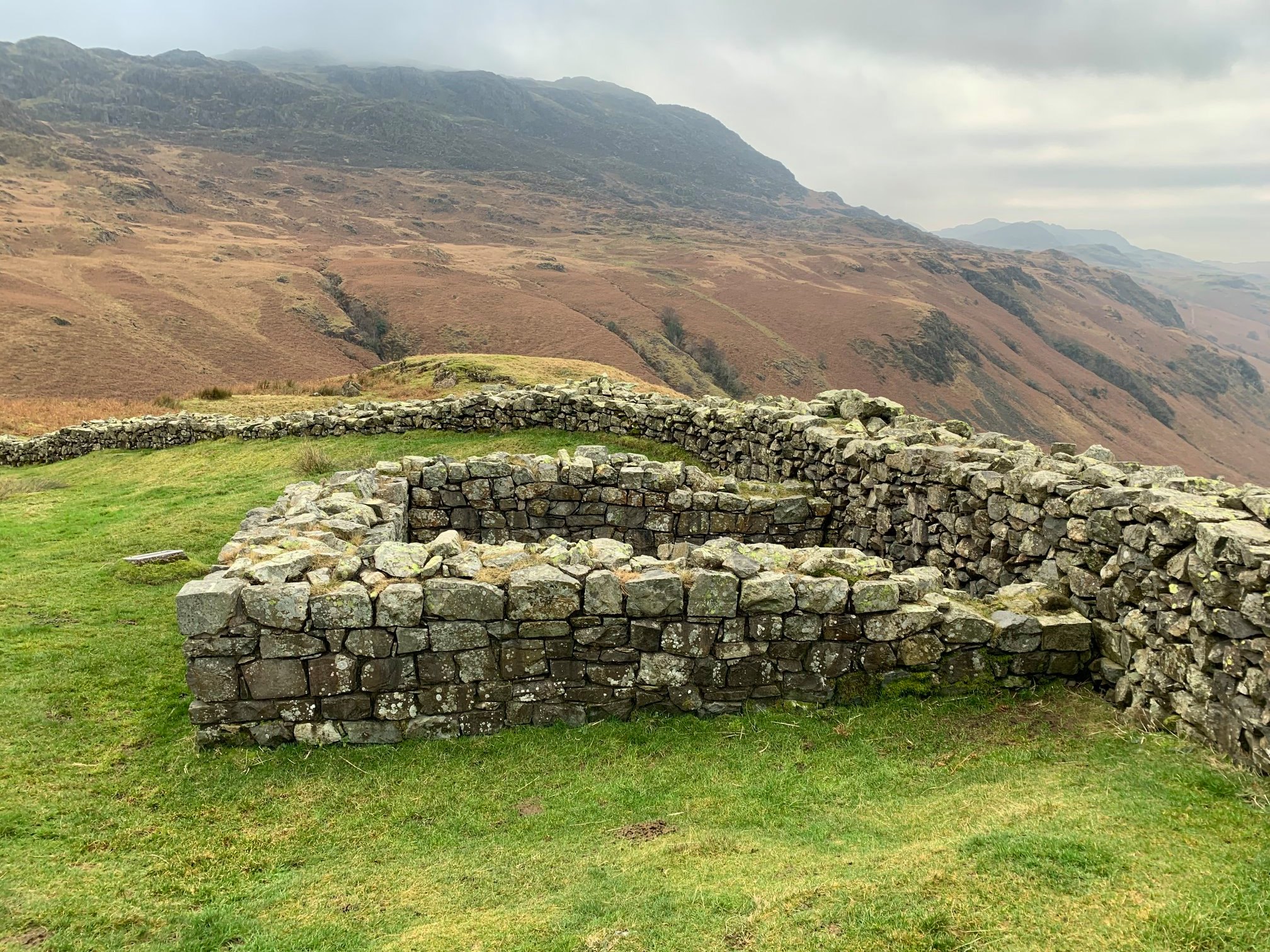 The interior of the fort is an ankle breaking mish mash of immovable rocky outcrops, free running streams and bog. Of the location and structure of the wooden barracks, stables, forges and other necessary structures to support a permanent garrison there is no sign on this harsh terrain. 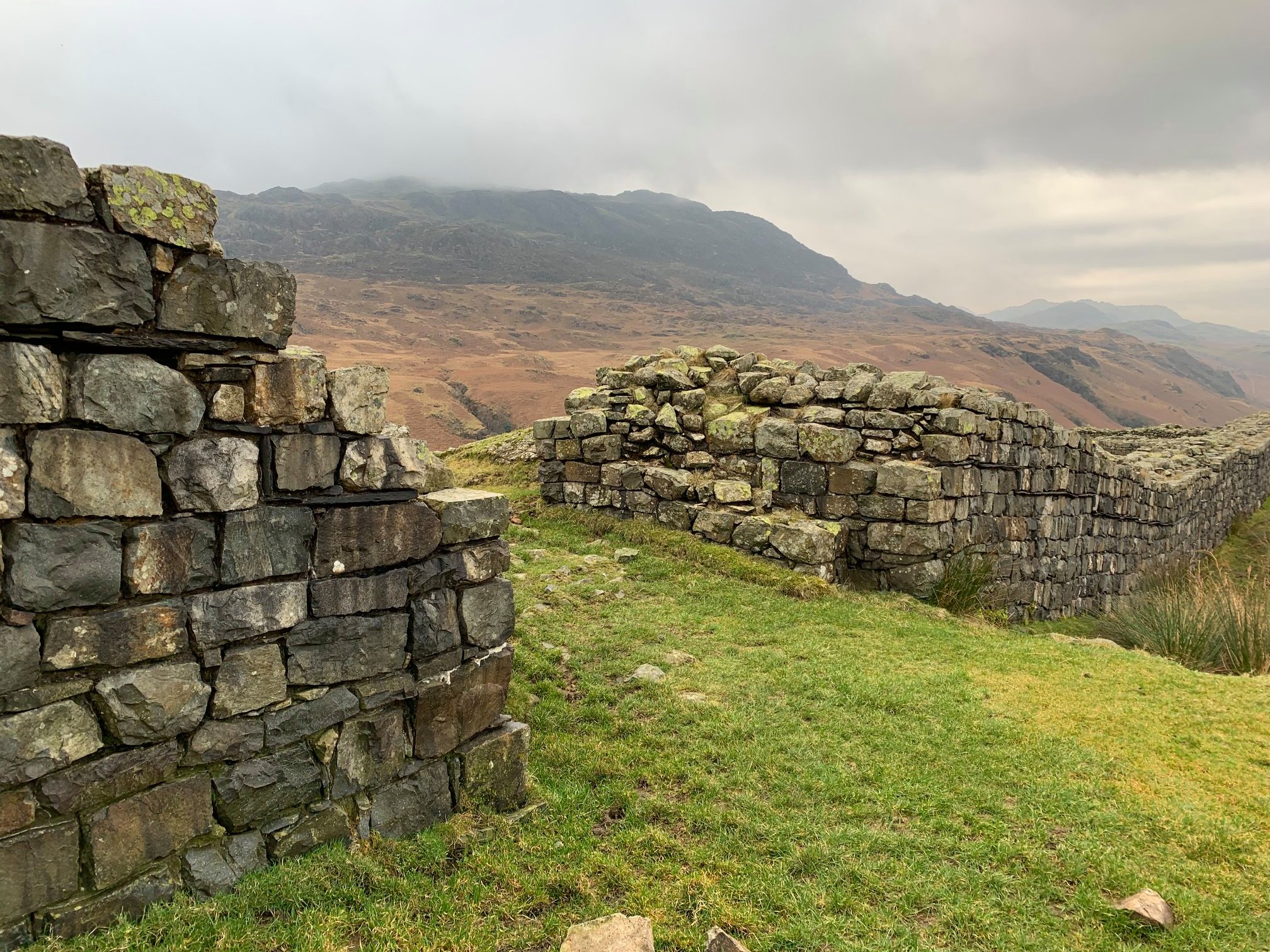 There is a Vicus, or civilian settlement referenced by Collingwood, but again no sign can be seen, and frankly its difficult to find enough level ground around the fort to imagine where one could be placed.
This is a hard place: the landscape dominates the archaeology, and the weather dominates the landscape. Rarely could you find a site so isolated, damp and hopelessly chilled. 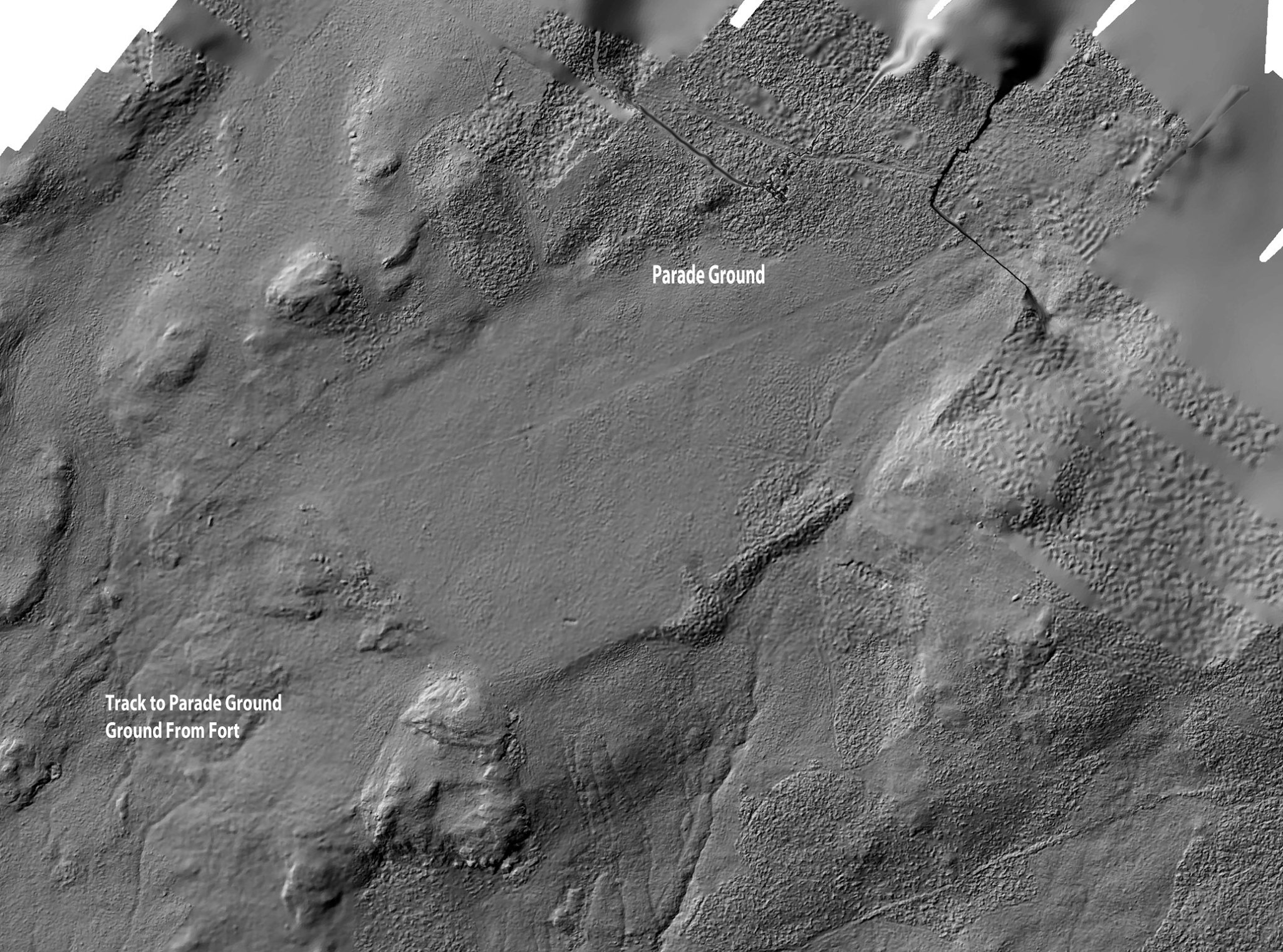 Should you visit?
Definitely: it’s a difficult drive, it’s a wild and lonely place and the impact of the trip alone I suspect will stay with you a long time.
You won’t spend long there – we took longer driving from Ambleside than we did on site: but, as the weather closed in, and the mist descended from the high peaks around us the only sound was of the stream running down the hills and over the exposed rocks.
You just know that you will never be closer to the cold and disheartened young lads who built this precarious fortress 1800 years ago. And for that reason alone how can you not make the trip?
Text and images supplied by YAAMAPPING