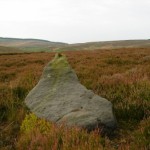 A Group to discuss the ancient rock are that is found in the Moors and Fells etc.

Welcome to the Rock ArtGroup on Brigantes Nation

Here we discus all things related to Ancient Rock Art.

Ever Wonder while out on a Sunday stroll in the country side and coming across an old rock : ”oh no whats that something scribbled in that rock you start thinking do i need an eye test.
Rock art do exits and was in use as early as the Mesolithic era up to early bronze age or though by the early bronze age things things starting to change the way our ancestors lived.
So why did our ancestors scribbled in stone?

open air rock art, an earthfast boulder either decorated with single cup or cup-and-ring linear lines pecked lines and mixed . It has been noticed that basic single cup marks been found near watercourses it is thought of that this could have been used as way markers or basic cup marks been found associated with funerary and cairns. Now bear in mind that most barrows have been excavated so the stone boulders would a been scattered.

It has been suggested that ancient track ways had or still have portal’s 2 standing stone that marked the entrance would be decorated with rock art. Cairns and burial mounds had mixed rock art present while some had only a single cup .

Not to forget archaeastronomy with there pointers and counters pointers to specify direction where the summer / winter solstice would take place and the counters are the domino pattern rock art some have 6 some have 12 and it is been noticed that there is finds of 13 simple cup marks. This will led us to landscape – ritual – and rebirth.

A no cairn corridor an ancient path way for human and there cattle to move around while ritual so to speaking was away from this corridor. The rebirth ” Rebirth of our sun ” or though it is been noted that some early ancestors did worship our moon so either rebirth of sun / moon is included in ritual early calendar have been used by our ancestors thousands of years ago.
Then comes the sacred hills it has been noted that various ley lines between hills or monuments connect over many miles a sacred hill will be the sun rise just above and can be seen easily within this lines are cairns burial mounds and rock art.

Latest in the Forum

Sorry, there was no activity found. Please try a different filter.