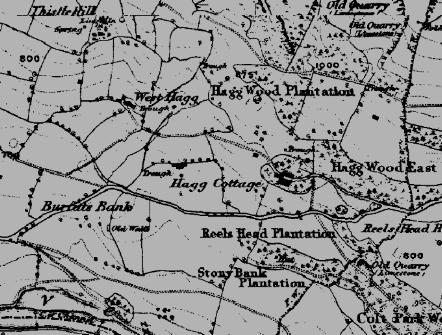 The Fremington hoard was found sometime prior to 1833 and the objects were presented to the Yorkshire museum, further items however, were later presented to the British Museum in 1880 and there has be conjecture as to if both collections were from the same, or different hoards. Both however are attributed to Fremington Hagg and can therefore due to there similar constrution and design be treated as from the same deposition.

The hoard comprises of pendants, roundels and other objects related to “horse furniture” of Roman origin, which Graham Webster has suggested were of the period AD60-70, and were probably lost by a Roman force at a time prior to the conquest of Brigantia.

This is the strongest evidence of pre-conquest battle between the Romans and the Brigantes, in his paper “A hoard of Roman equipment from Fremington Hagg (Soldier and civilian in Roman Yorkshire, Leicester University Press 1971, p.107.) Graham Webster states: ” The Fremington Hagg Hoard is therefore most likely to be pre-Flavian and cannot be associated with the conquest of Brigantia in A.D. 71. There were, however, earlier incursions of Roman troops into this area. Tacitus records the events following the divorce of Venutius, when Cartimandua was kept on her throne by force of Roman arms, and fighting may have continued until the end of the governorship of Gallus (Annals, xii, 40). The circumstances of the find, although our total knowledge at present confined to the name of the find spot, would nevertheless seem to indicate a cache of loot taken after an engagement and hidden by a follower of Venutius, never to be recovered. It is even possible to imagine that the warrior may have been deceived by the sparkling, tinned sheen of the trappings into thinking of them as solid silver. It is difficult to conceive of this hoard being buried under Roman auspices.”

This find, together with the earthwork dykes thrown up to separate Fremington from the Reeth valley, an area which was probably heavily engaged in lead mining at the time and was certainly an Iron Age centre would tend to indicate that this is the site of the first major engagement between Cartimandua and Venutius, the conjecture being that Venutius by force of otherwise had taken the area of Reeth, which was rich in the resources needed to fund his revolt against Cartimandua. Cartimandua, feeling the effect of this loss of territory, retaliated by attacking Venutius at Reeth. After laying seige to the Reeth area, Cartimandua found herself in difficulty, possibly pinned down in the Fremington area (Fremington Castle Manor, a folly, may have been built over a much earlier earthwork), and needed to send for Roman help. The Roman’s, realising the need for a rapid response, sent a cohort of cavalry to mount a rescue operation, which was a success, but not without the loss of Roman lives.