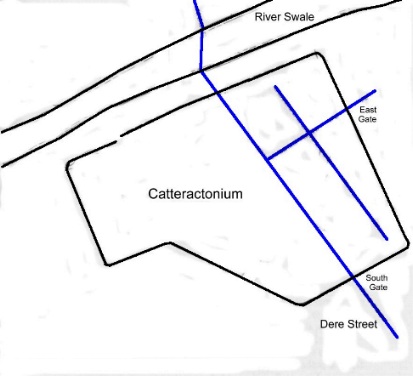 The Fort at Catterick. It has an unusual shape due to multiple fort plans being overlayed on it.

Originally it was a Roman fort, but a settlement soon sprang up outside the fort, which soon dominated the fort, and Catterick became one of the most important ‘Small towns’ in the north of Britain. In 1959 the new bypass went straight through the town, destroying the ‘mansio’ or posting station that was at its heart. Excavations over the past 40 years have produced a mass of material, which we here pull together to unveil the mystery of Roman Catterick 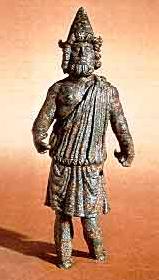 Statue of Vulcan found at Catterick

The grave of a castrated priest who dressed in women’s clothing and jewellery in fourth century Yorkshire has been unearthed by archaeologists. (English Heritage press release 2002).

Peter Wilson, senior archaeologist at English Heritage, with the skull and face mask of the priest
Buried in a matching jet necklace and bracelet, the young, slightly built man is thought to have been a eunuch follower of the fertility goddess Cybele.

He is one of the few Roman eunuchs ever discovered in Britain and highlights how even the northernmost reaches of the empire were relatively cosmopolitan 1,700 years ago. The finds come from the bustling Roman town of Cataractonium which lies close to present-day Catterick. Part of the town lies under a racecourse while some of it was destroyed when the A1 dual carriageway was built in the 1950s. Although excavations began in 1958 and carried on until 1998, the significance of many of the finds had been fully appreciated only recently. The skeleton was buried at a grave at Bainesse, a farm close to Catterick and once an outlying settlement of the Roman town. The man appeared to have died in his youth, although the cause of death is not apparent. The jet necklace and bracelet, a shale armlet and a bronze expanding anklet contained about 600 stones. When the remains were first discovered in the 1980s, archaeologists assumed that the skeleton was of a woman but subsequent tests revealed it to be that of a male.

The findings are described in the two-volume Cataractonium: A Roman Town and its Hinterland, edited by Dr Pete Wilson, a senior archaeologist at English Heritage. “He is the only man wearing this array of jewellery who has ever been found from a late Roman cemetery in Britain,” said Dr Wilson in York yesterday. “In life he would have been regarded as a transvestite and was probably a gallus, one of the followers of the goddess Cybele who castrated themselves in her honour.” Cybele was imported from Anatolia in the 3rd century BC and became a Roman state deity. The Roman town developed from a military fort on Dere Street, an important route for legions heading north. Archaeologists have discovered shops, leather workshops, elaborate baths and evidence of an influx of foreigners who left behind continental-style brooches.

Two of the finest finds include a statue of the smith god Vulcan, and an enamelled flask that once contained perfume. A pottery mask, probably used for religious theatre, was also discovered. Dr Wilson, who pulled together 40 years of research for the books, said: “This portrait of a constantly changing community would never have emerged but for the 20th century road construction which finally destroyed the remains of its buildings.”

A fort was established in the later first century at Catterick, perhaps under Agricola, where Dere Street crossed the river Swale. It was abandoned by the early second century, although a small town occupied the site from the mid second to the fourth century. The writer of one tablet (343), perhaps a trader supplying the army, is concerned for the delivery of a batch of hides at Catterick. As well as this letter, the large deposit of tannery waste found in the annexe of the early fort suggests that Catterick produced leather for much of the army of the northern frontier. 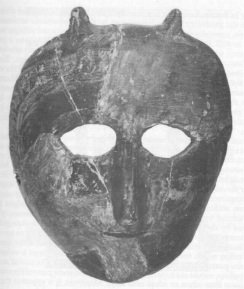 Part of a Theatrical Mask
recovered from Catterick.