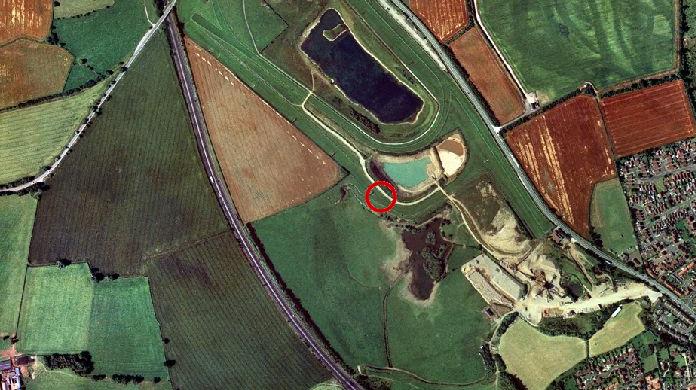 Analysis of air photography has revealed the almost complete plan of a feature. Thought to be a henge of similar nature to those elsewhere in the Swale-Ure valley. The bank of the earthwork was composed of river cobble and gravel dump construction. The cropmark remains appear to be the henge bank of some 140m in diameter. The line of Dere Street cuts through the cropmark, confirming a pre-Roman date. Originally, this was interpreted as a Roman amphitheatre, however, current thought is that it is most probably a henge.

“Until now the Mayburgh henge has been considered exceptional in that it lacked a ditch and its single bank was composed of small river derived stones. The Catterick henge appears, from the excavated evidence, to be of similar plan and construction, and it is only slightly larger than Mayburgh, which has diameters of c. 87.5m (internal) and c 124m (external) with a single entrance through the 36.6m wide bank. Unfortunately none of the apparent gaps in the bank at Catterick can be positively identified as entrances”. P. R. Wilson – Catteractonium.