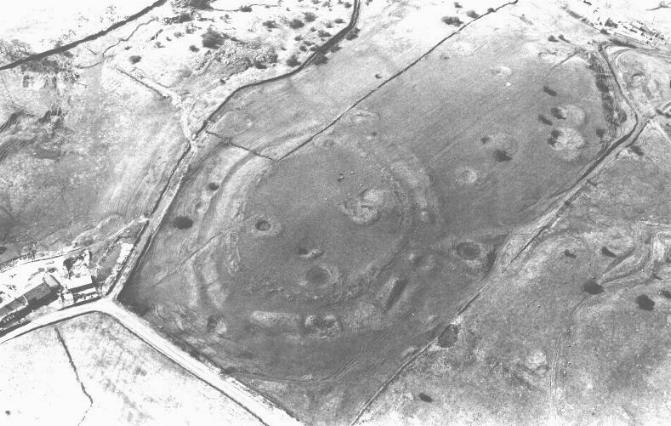 Directions. 0/S 1:50,000 series map 103 ref. 885384. Leave Nelson on the A6068 towards Colne, and turn right after passing under the railway bridge at Colne station. Follow this out of the town, up the steep hill until the gradient eases, and the hillfort is on the right at a sharpish left hand bend, by a junction. Park here, and a footpath leads from the bend to the hillfort.

District: Pendle
Name : Castercliff Camp, Nelson.
Description: Iron age hillfort with hut circles, but somewhat scarred by mining.
Castercliff is a small multivallate hillfort of Iron Age date. It is located on an eminence overlooking the Calder Valley and includes an oval-shaped internal plateau measuring approximately 115m by 76m that is enclosed on all sides except the north by three rubble ramparts, each up to 1.5m high and situated on the slope of the hill, with an external ditch up to 1.5m deep in front of each. The maximum width of the whole rampart and ditch system is approximately 46m. On the north side the defences are incomplete and consist in the main of a single rampart and ditch. However some short lengths of triple rampart and ditch separated by areas of undisturbed ground are also visible here. Limited excavation of the defences indicated that the inner rampart was revetted with stone and also timber-laced.
SD: 88480,38390

“Lancashire too, has few hillforts, six in fact, none of which are of any great size. Castercliff is the county’s best example but, if truth be told, there are many other hillforts omitted from this gazetteer, especially in the South and West, to make room for a Palatine presence. That said, Castercliff is not without its merits, although first impressions are of a circular pile of rubble.

That in itself makes a change from the grass-clothed ruins of most hillforts, while Castercliff has an unusual appearance. On the inside a low bank forms an inner circle, which now is only about one foot high. This was the original rubble filled, wooden-laced, stone-faced rampart. Unusually, there does not appear to have been a ditch, while entry was gained in the west. A number of excavations have been undertaken on this two acre site, in 1958, 1960 and 1970-71, and it is thought that this rampart had been ‘vitrified’, either by design, accident or attack. This is unusual for England, but there are a great number of vitrified hillforts in Scotland, i.e. the rampart’s internal timbers have been set on fire, by any of the three aforementioned methods, to weld, or ‘vitrify’ the stones together.
Immediately beyond the original rampart is the second timber revetted, box rampart, with a ditch up to ten feet deep in places, and a counterscarp bank to the south. This rampart is in a series of short lengths in the north, and the excavations have shown that the flat land between has not been built on. Castercliff was thus abandoned before its rebuilding was completed, and the excavators came across no finds of significance, which begs the question of it ever being permanently occupied.
The entrance to the later hillfort also appears to have been in the west, while it might have been intended to have one in the east as well. It was thought that Castercliff was built in the first century B.C., but good old Carbon-14 dating of charcoal has revised that somewhat, and it was probably constructed in either the sixth or seventh centuries B.C.
Castercliff stands on a surprising 930 feet high plateau, in the foothills of The Pennines. Although the hills rise to a considerable height to the east, they are not overpowering, while the hillfort was well situated in terms of over-seeing the land to the north, south and west, in particular the river valley.” The Iron Age Hill Forts of England, 1993 – Geoffrey Williams.

Description
Castercliff Camp is a small oval Iron Age multivallate “Vitrified” hillfort (enclosing c.2 acres). It has been suggested that the hillfort was built in two stages, the second of which was not completed. Forde-Johnson states: “The original defenses appear to have consisted of a single bank without a ditch, with a bank and ditch between, and in places, a counter scarp bank added later. On the northern side of the site, however, these additional defenses appear to have been unfinished. Instead of a continuous bank and ditch there are a series of short lengths with level ground between them, that shows no sign of having been disturbed.”
This was corroborated in 1971 by Coombs who excavated the central rampart and found in between two of the rampart sections an area of undisturbed ground. The excavation also revealed continuous bedding trenches front and rear, 6 feet apart, in which were set chocked post holes up to 3 feet deep and about 6 feet apart. The rubble core, 5 feet in height survives and the bowed outline of revetting was visible in the excavated sections. Beyond the rampart was a rock cut ditch 5 feet deep and 6 feet wide at the mouth, with a probable counter scarp bank. The inner rampart was much denuded, due to the removal of large quantities of stones in the 19th century, it consists of a “low rubble and timber deposit very heavily vitrified”, which probably constituted a stone revetted timber laced rampart. Roman coins have occasionally been found at the foot of the hill, but also more surprisingly an iron cannon ball, weighing six pounds, was also found. {4}{5}{6}{7}{8}{9}{10}
There are many mining works and bell pits on the hill. {11}
The air photos also reveal very faint traces of two circular or sub-circular platforms at SD 88383809 and SD 88453811. {12}

“This denuded hillfort is oval and encloses almost two acres. The defences comprise triple circuits of bank and ditch, with scarps representing outworks to the NE. The innermost bank is the slightest and may represent an earlier, univallate fort. It is complete, but shows only as a scarp or a very low bank. The middle ditch and bank are the stoutest, rising 3-5ft. above the interior and falling 9 ft. to the present ditch floor. There are many gaps in it. The outer bank is the couterscarp to the central rampart and is discontinuous, but is well preserved along the S and E sides. Outworks, which show as scarps, with short isolated lengths of bank, can see seen around the E and NE sides, aboput 70ft. beyond the main defences.

The interrupted middle earthwork suggests that this, the second phase of the hill-fort, was never finished. Not dated.” Guide to Prehistoric England, Nicholas Thomas. 1960.

Sources – from the SMR record